Recent release “Marching on Tuzla” from Page Publishing author Greg Pickell is an impassioned story of two different military officers and their exploits that define their fervor for their nation and paramours. 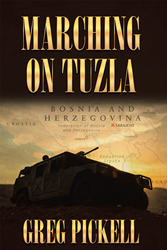 Greg Pickell, a graduate of the US Military Academy and a retired veteran living in Fairfax, Virginia, with his family, has completed his new book “Marching on Tuzla”: an enthralling tale of two soldiers who each prove their allegiance to their fatherland and the rise of love within them for two extraordinary women.

Author Pickell proves that there are two sides to every reality that is worth noting and pondering upon: “Marching on Tuzla is the story of two professional military officers forced into conflict in the turbulent geopolitics of the Balkans in the 1990s. Initially unaware of each other, the two men find professional satisfaction and career success as they grapple with their demons. Darius Grant, a West Point graduate disillusioned by the army’s detachment from the realities of modern combat, resolves to right at least some of the wrongs he sees affecting the safety of his men. Alekse Savic, a Bosnian Serb nationalist and gifted military leader and planner, commits himself to the preservation of his homeland in Serb-controlled Northern Bosnia. International politics and strategy bring them into conflict, as each attempt to attain his goals. Along the way, they find love in the arms of Megan Rostov and Zhanna Anisimov, women as accomplished and driven as themselves. The climatic events at the conclusion of this story find the two men in direct confrontation in the hills of Central Bosnia, with victory hanging in the balance.”

Readers who wish to experience this work can purchase “Marching on Tuzla” at bookstores everywhere or online at the Apple iTunes store, Amazon, Google Play, or Barnes and Noble.