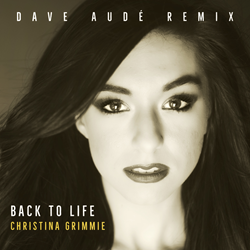 "We're excited to collaborate with Dave Audé on this remix project considering his impressive music career. Back To Life was written by Christina in 2015." - Albert Grimmie

ZXL Music, Inc. and The Grimmie Family announce a new posthumous release by late singer Christina Grimmie on Friday, April 16, 2021. The never-released song, Back To Life, was written by Grimmie in 2015 and is the first of a series of releases featuring collaborations with award-winning DJs in dance music. The first release on April 16 features Platinum ®GRAMMY Award-winning songwriter, DJ, and producer Dave Audé, with an unprecedented 132 number one remixes on the Billboard Dance Club Songs Chart. Audé has garnered a reputation in the industry as a master producer and remixer, collaborating with acclaimed artists such as Beyoncé, Bruno Mars, Selena Gomez, and Lady Gaga.

Albert “Bud” Grimmie, Christina Grimmie’s father, stated, "We're excited to collaborate with Dave Audé on this remix project considering his impressive music career. Back To Life was written by Christina in 2015, and it seems like a timely anthem for Spring, and the reopening of our country following the global pandemic.” The remix project launches with a unique reverse-release strategy, with all remixes releasing sequentially over the next 45 days, culminating with the original version's release. Grimmie's brother, Marcus Grimmie, added, "As a song, Back To Life strongly represents the power of Christina's ‘FRANDS,' (a term of endearment for her fans, whom she considered friends). The fans are keeping Christina’s legacy alive and growing. We couldn’t do any of this without them and their support." Proceeds from the project benefit the Christina Grimmie Foundation.

LISTEN TO “BACK TO LIFE - Dave Audé Remix” HERE: https://fanlink.to/backtolifedaveauderemix

About ZXL Music and Christina Grimmie
ZXL is a record label representing, publishing, and releasing music for Christina Grimmie. With a big voice and an even bigger heart, beloved singer, songwriter, fan-favorite from NBC's The Voice, and YouTube icon Christina Grimmie was one of those stars. The 22-year-old New Jersey native built a staggering fan base of 3.8 million YouTube subscribers, delivered one of the most talked-about performances on The Voice with her show-stopping season six rendition of "Wrecking Ball," and achieved numerous accolades. In June 2016, during a fan meet-and-greet, she was killed by a deranged gunman. After her tragic passing, the Grimmie family was determined to create a legacy in her honor by establishing the Christina Grimmie Foundation. For more information on upcoming music releases, please visit http://www.christinagrimmie.com.

About the Christina Grimmie Foundation
The Christina Grimmie Foundation is a 501(c)3 charity created to support families who have lost a loved one to gun violence -- a cause the Grimmie Family was personally impacted by and strongly supports. The Foundation provides financial assistance to help families who encounter this hardship so they can focus their energy on healing. People helping people. Visit http://www.christinagrimmiefoundation.org for more information.