Study Raises Important Concerns Regarding Limitations on Some Central Banks’ Emergency Powers, and Limitations on Other Emergency Measures Used to Fight the 2007-2008 Global Financial Crisis 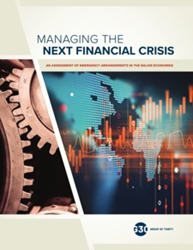 Cover of "Managing the Next Financial Crisis: An Assessment of Emergency Arrangements in the Major Economies"

Ten years on from the start of the 2007-2008 global financial crisis, extensive reforms, including substantially more conservative capital and liquidity regulations, will help create more stable and resilient financial systems in the major economies. The reforms also provide promising new tools for resolution and restructuring. But the new prudential safeguards focus primarily on the traditional banking sector, and less on the range of other financial institutions and sources of credit that were such critical points of weakness in the global financial crisis, and central banks have a diminished ability to respond swiftly and effectively to a financial crisis of a systemic nature, the Group of Thirty (G30) said today.

The G30, a forum of leaders in international finance, today released Managing the Next Financial Crisis: An Assessment of Emergency Arrangements in the Major Economies. The report specifically addresses the following two questions: 1.) Do authorities have the tools available to fight the next financial crisis when it strikes? and 2.) What can be done now to adapt or adjust these tools to make crisis fighting more effective?

“Overall, the post-crisis shift in emergency powers of governments and central banks has improved the ability to deal with failures of individual institutions and modest shocks to the financial system, but it has reduced the flexibility to deal with a systemic crisis,” said Timothy Geithner, Co-Chair of the G30 Emergency Mechanisms and Authorities Working Group, President of Warburg Pincus, and former Secretary of the United States Department of the Treasury. “This weakness is particularly acute in the case of international contagion, and for systemic events that originate in the shadow banking system. Of greatest concern, some of the tools available to fight extreme crises, when and if they recur, have been weakened, especially in the United States.”

“Our biggest concerns involve complacency and migration,” said Guillermo Ortiz, Co-Chair of the G30 Emergency Mechanisms and Authorities Working Group, Partner and Member of the Board at BTG Pactual, and former Governor of the Banco de Mexico. “We believe that the new preventative frameworks, when fully implemented, make a crisis in the traditional, regulated banking sector less likely, but the likelihood is still not zero and never can be. Central banks in developed and emerging markets need to have the necessary tools to respond to banking crises. And it is not enough to fight the last crisis. The next financial crisis will likely come from a new source. Are our regulators prepared for the next crisis? Cyber risks are one often-cited emergent risk. The more general concern, however, is that the central banks and supervisors may not be placing enough emphasis on preparing for new types of emergent risks.”

G30 Emergency Mechanism and Authorities Working Group Vice-Chair Axel Weber, Chairman of UBS Group AG and Former President of the Deutsche Bundesbank, added, “While providing important new options for dealing with failing financial institutions not available during the global financial crisis (GFC), the newly developed resolution and restructuring framework remains largely untested. Even when fully implemented and working as designed, the new preventative frameworks and resolution and restructuring regimes, by themselves, may not be enough to handle all crises. These new systems need to be supplemented by a workable set of intervention tools available to the authorities to deploy in extreme or systemic crises, with appropriate accountability for their use. Since all crises are different, authorities should be equipped with the flexibility to quickly adapt in an escalating crisis, mindful of issues of political legitimacy and the need to coordinate with other government agencies. And while European central banks retain considerable emergency powers, questions remain as to the effectiveness of those mechanisms when faced with a severe broad-based crisis. ”

Mr. Geithner, Dr. Ortiz, and Dr. Weber led the Steering Committee of the G30 Working Group on Emergency Mechanisms and Authorities, supported by 13 working group members. Andrew Metrick, the Janet L. Yellen Professor of Finance and Management at Yale University, served as project director. In producing the report, project staff, working under the supervision of the G30 Steering Committee, collected and evaluated empirical evidence from the GFC, and conducted approximately 30 interviews with prominent experts on the emergency tools available to policymakers in the event of a financial crisis. Interviewees included both current and former senior officials at central banks and regulatory agencies, and leaders from the legal communities in the United States, the United Kingdom, Europe, and Asia.

The report offers a discussion of conclusions and recommendations for preventing future financial crises, on the resolution and restructuring efforts that have been developed post-GFC, and on available emergency tools. It also contains appendices on major legal challenges following the GFC, an overview of resolution and restructuring regimes, central bank lending and asset purchases, and emergency powers for guarantees and capital injections.

The Group of Thirty, formally known as “The Consultative Group on International Economic and Monetary Affairs, Inc.” was founded in 1978. The Group of Thirty is an independent, nonprofit, international body composed of senior representatives of the public and private sectors and academia. The Group aims to deepen understanding of international economic and financial issues, to explore the international repercussions of decisions taken in the public and private sectors, and to examine the choices available to market practicioners and to policymakers. The Group is led by Jacob A. Frenkel, Chairman of the Board of Trustees, and Tharman Shanmugaratnam, Chairman of the Group.

G30 Media Briefing: At 9:00am EDT on September 6, 2018, the G30 convened a live webcast press conference with Timothy Geithner, Guillermo Ortiz, Axel Weber, and Andrew Metrick. After delivering opening remarks on specific topics addressed in the G30 Managing the Next Financial Crisis report, Mr. Geithner, Dr. Ortiz, Dr. Weber, and Dr. Metrick answered journalists’ questions about the report. To view a replay of the webcast, please go to: https://event.on24.com/wcc/r/1789650/0AB686DB7E77D428DE0D8DEF0A4F2157

For more on the G30, and to download today’s report, please go to http://www.group30.org

Managing the Next Financial CrisisPDF Copy of Report