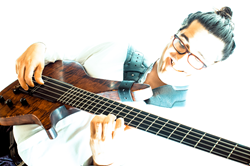 I’ve been using the DuoStrap Neo and WOW!!! What else is there to say? This thing has changed my playing completely. For all of my gigs I feel so secure, as if I am sitting on my couch at home and playing without any effort.

In 2007 upon receiving a scholarship, he attended Prins Claus Conservatorium in Holland for a short period.

Elie then attended the The Collective School of Music in New York in 2012 after receiving another scholarship. It was here that he was quickly exposed to the New York scene, as well as meeting many great players that Elie would also learn a tremendous amount from such as Matt Garrison, Tarek Yamani and Ian Foreman.