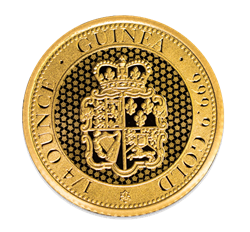 We believe this IRA-eligible issue represents an uncommon opportunity in today’s investment-grade bullion market, in these uncertain times, gold and silver bullion with historic, artistic, and tangible value is the best hedge against volatile stock markets and currency gyrations.

GSI Exchange, a top-rated coin, bullion, and precious metals dealer based in Calabasas, California, recently announced a special closeout sale on the highly sought-after Great Britain “Rose Crown” Guinea 1/4 oz. gold coin. The obverse of the coin depicts the effigy of HM Queen Elizabeth II designed by renowned Raphael Maklouf, an Israeli-born British sculptor, probably best known for designing the effigy of Queen Elizabeth II used on the coins of many Commonwealth nations from 1985 to 1997. The reverse of the coin recreates the reverse design found on the historic rose crown shield guinea.

The government and treasury of St. Helena, a volcanic island originally discovered in 1502 by Portuguese sailors in 1502 and coming under British control through a charter issued by Oliver Cromwell, have launched their first gold bullion coin for investors and collectors. The new coins bearing this specific design with a legacy denomination of one guinea and a date of 2018 are being issued for the first time in over 350 years after its initial release.

There is a great deal of investor and collector interest in this particular release, which is limited to only 10,000 coins. “We believe this IRA-eligible issue represents an uncommon opportunity in today’s investment-grade bullion market,” explains Anthony Allen Anderson, Senior Partner at GSI Exchange, “in these uncertain times, gold and silver bullion with historic, artistic, and tangible value is the best hedge against volatile stock markets and currency gyrations.”

The “rose crown shield” guinea was first issued in 1727 as a tribute to the original coins released during the reign of King George II. It derives its name from the elaborately decorated crowned shield of the royal arms, which was commonly compared to an open rose. The shield itself is divided into four quarters and depicts representations of the kingdoms of England (and Wales), Hannover, France, and Ireland. The shield, or crest, denoted that aside from being king of England, Scotland, and Ireland—with the titular claim to the throne of France—George II was also Duke of the Electorate of Brunswick-Lüneburg. The latter was the ancestral homeland of the new Hanoverian Dynasty, which inherited the English throne upon the death of Queen Anne in 1714. The distinctive and intricately detailed design remained in use well into the reign of King George’s grandson and successor, King George III.

“The Great Britain ‘Rose Crown’ Guinea Gold Coin is already one of our most popular coins and supplies are extremely limited,” says Anderson, “we are very lucky to be able to offer these coins to our clients at special closeout prices while they last.”

Founded by industry veterans, GSI Exchange is a leading national coin and precious metals company specializing in wholesale precious metals trading as well as direct sales to the general public. The GSI Exchange investment management team has over 75 years of combined market experience and relationships with most of the biggest suppliers around the world.

GSI Exchange has an almost unlimited inventory of the highest-quality silver, gold, palladium and platinum coins at the most competitive prices.