Line-Up of Legends Coming Together For ‘Pre-Game’ Chat Ahead of Tonight’s Karate Combat: Season 3 Finale on CBS Sports Network 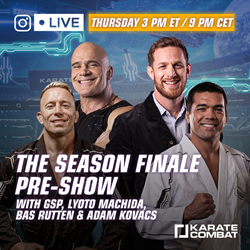 Among the topics for discussion will be the season’s standout performers, upcoming title shots and why St-Pierre told MMA journalist Ariel Helwani he considers Karate Combat rules “too dangerous” to consider for a comeback fight.

Comments will be open for IG Live viewers to take part in the discussion.

The Karate Combat Season 3 Finale episode will air tonight at 9pm ET on CBS Sports Network and across Europe and Asia on the Eurosport network (10pm Local).

Chelmiah, of Laois, Ireland, debuted for Karate Combat at the start of this season and has scored two crushing victories in quick succession, earning himself this title shot and a growing international fanbase.

Mardhi, of Paris, France, is a Karate Combat veteran who has previously challenged for the lightweight championship. He earned this title shot by scoring a decisive win when he dropped to bantamweight earlier this season.

“Two guys with very different styles, both of them are proven fight-finishers and the World Bantamweight Championship is on the line - this is a huge fight to crown the season with and I can’t wait to see how it plays out,” said Kovacs.

“Chelmiah is all about forward pressure, Mardhi is like a sniper, he likes to come in and out. Very different characters as well; Chelmiah is from the countryside, Mardhi was a street guy. There’s a real yin/yang contrast between them, but whoever wins is a worthy champion for sure.”