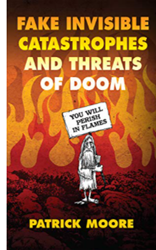 Fake Invisible Catastrophes and Threats of Doom by Patrick Moore

Most of the scare stories in the media today are things that are invisible or remote, like polar bears ..This is my effort, after 50 years as a scientist and activist, to expose the misinformation and outright lies used to scare us and our children about the future of the Earth. - Dr. Patrick Moore

In a press release of Feb. 26, 2021, UN Secretary-General António Guterres said 2021 is a ‘make or break year’ and urged countries to commit to stringent NetZero greenhouse gas reductions to meet climate targets, but Friends of Science says the UNFCCC climate catastrophe claims are based on outdated science.

Moore says: "It dawned on me one day that most of the scare stories in the media today are based on things that are either invisible, like CO2 and radiation, or very remote, like polar bears and coral reefs. Thus, the average person cannot observe and verify the truth of these claims for themselves. They must rely on activists, the media, politicians, and scientists - all of whom have a huge financial and/or political interest in the subject - to tell them the truth. This is my effort, after 50 years as a scientist and environmental activist, to expose the misinformation and outright lies used to scare us and our children about the future of the Earth. Direct observation is the very basis of science. Without verified observation it is not possible to know the truth. That is the sharp focus of this book."

Friends of Science Society hosts a video presentation by Dr. Moore on a similar theme on their YouTube page.

By contrast, climate policy experts should review the research of Roger Pielke, Jr. and Justin Ritchie, whose work shows that the climate catastrophe scenario is based on outdated science.

Their peer-reviewed research was published in Elsevier’s “Energy Research and Social Science” of Feb. 2021. They show that the Intergovernmental Panel on Climate Change (IPCC) reports have consistently distorted climate projections by relying on the most extreme and least likely scenario referred to as Representative Concentration Pathway 8.5 (RCP 8.5).

Pielke, Jr. and Ritchie write: “For more than a decade, climate research and assessment has emphasized an extreme and implausible representation of the future under RCP8.5…. RCP8.5 has been used extensively as a baseline for projecting future climate impacts and evaluating policy options. The misuse of this particular scenario has been consequential, as it has been emphasized by the IPCC, the U.S. National Climate Assessment and is pervasive in the underlying literature that these assessments rely upon. A Google Scholar search indicates almost 4,500 articles referring to RCP8.5 and “business as usual.”

Friends of Science Society has released a new Robert Lyman report entitled “When Giants Arise: The Real World of GHG Emissions and Growth”. Lyman writes: “According to United Nations data, the global population will grow by more than two billion people between 2018 and 2050, and almost all of this growth will be in Asia and Africa. Europe and North America, which had only 15% of the world’s population in 2018, will see that share shrink to 11% by 2050….With its ever-declining shares of global population and income, “the west” will not be able to constrain the aspirations, or the emissions, of the emerging giants.”

Consequently, Guterres’ call for NetZero targets fails on scientific, technological, and demographic grounds. Citizens should question the authority and true objectives of the misinformed UNFCCC, the misuse of scenarios by the IPCC, and reject the claims of the related climate-catastrophe-fellow- travellers like Greta Thunberg, says Friends of Science Society.

WHEN GIANTS ARISE: The Real World of GHG Emissions and GrowthWhatever [climate] “leadership” western countries may have enjoyed in the past is fast being overtaken by the economic and population growth in the non-OECD countries and especially in Asia.