H.J. Bowman’s newly released “Meathwyn” is an enthralling book of two women who are magically transported to another world set in a past era

“Meathwyn” from Christian Faith Publishing author H.J. Bowman is a breathtaking narrative filled with the adventures of two girls who are brought into a different nineteenth-century world. 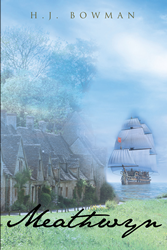 “Meathwyn”: an enchanting novel about two office girls from the post–Second World War time who find themselves magically teleported to another world during the nineteenth century where they battle dangerous foes and learn important lessons on faith and self-esteem. “Meathwyn” is the creation of published author H.J. Bowman, a thirteen-year navy veteran and a student of the works of C.S. Lewis.

Bowman shares, “What happens when C.S. Forester meets C.S. Lewis? ‘Meathwyn,’ of course! Two office girls in post–World War II London suddenly have their routine lives transformed by a sudden and unexpected arrival into another world set in the nineteenth century. Their travels take them from a country meadow to a rural village amid a teeming city. Adventure awaits on an eighteen-gun sloop-of-war and later an ancient coast defense ship now used for training. Village life, battles with river pirates, open ocean sea fights, rescuing shipwrecked mariners, ship-to-shore bombardments, and earning the local equivalent of the Victoria Cross while evacuating a settlement in the face of armed opposition are all in a day’s work for the intrepid duo. Other challenges come from learning a new way of life, exposing corporate corruption, and transforming the navy’s joke into a sought-after duty assignment. Add a meddlesome queen and a retired admiral that is now a priest, mentor, and father figure, and you have a tailor-made situation for the two young women to learn a lot about life, themselves, and trusting God without reservation in all situations.”

Published by Christian Faith Publishing, H.J. Bowman’s new book is a masterful opus that will surely bring thrill and encouragement to readers through the resolute circumstances of two girls displaced by time and space.

Follow the extraordinary journey of two girls through perilous tides and corrupt institutions in an otherworldly and uncanny world.

Consumers can purchase “Meathwyn” at traditional brick-and-mortar bookstores or online at Amazon.com, Apple iTunes store, or Barnes and Noble.

For additional information or inquiries about “Meathwyn,” contact the Christian Faith Publishing media department at 866-554-0919.