A recent issue of the journal Gut Microbes, featured in an article on news-medical.net, provides new insights into the pathophysiology, diagnosis, prevention and treatment of Helicobacter pylori (H. pylori). Experts at PineNutOil.org, along with natural healers across the globe, have supported the use of pine nut oil to treat h. pylori for years. 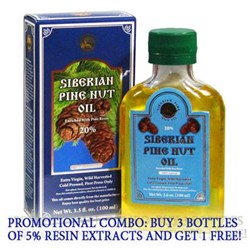 Siberian Pine Nut Oil is a natural medicine that has been proven to be an effective treatment for H. pylori.

The recent article, "Special issue on Helicobacter pylori provides new insights into diagnosis, prevention and treatment," (1) states that Helicobacter pylori, is the most common bacterial infection in the world, with more than half of the world’s population carrying the bacterium in their upper gastrointestinal tract. PineNutOil.org, the premier producer and supplier of Siberian pine nut oil, recommends pine nut oil as a treatment for H. pylori.

Natural healers and alternative medicine doctors have used pine nut oil to treat myriad health problems, including H. pylori even before they knew what is was, for hundreds of years. Although new research is being conducted to learn more about the H. pylori bacteria, like the research published in Gut Microbes (2), these healers and alternative doctors have always known the power of pine nut oil in treating diseases of the stomach and gastrointestinal tract.

With modern medicine advances in the past few decades, doctors and researchers have discovered that H. pylori is a microaerophilic bacterium found in the stomach that has been linked to gastritis and peptic ulcers. According to the National Cancer Institute (3), H. pylori is also a major cause of stomach cancer as well as gastric mucosa-associated lymphoid tissue lymphoma. In 1994, the International Agency for Research on Cancer classified H. pylori as a carcinogen, or a cancer-causing agent.

The National Digestive Diseases Information Clearinghouse (4), a division of the National Institutes of Health, states that H. pylori infections are common, especially in developing countries, and often begin during childhood. However, symptoms may not appear until adulthood or never at all. But for many people, H. pylori can be a painful burden and can lead to serious health issues.

"Research has proven that H. pylori can cause very serious health issues, such as peptic ulcers and various types of stomach cancer," stated Victor Rod, CEO of PineNutOil.org. "For this reason, it is very important for anyone suffering from stomach problems to get tested for H. pylori and begin to treat the bacteria as soon as possible. Siberian Pine Nut Oil is a natural medicine that has been proven to be an effective treatment for H. pylori, along with other conditions of the gastrointestinal tract."

Pine nut oil enhances the protective elements of the stomach and digestive system, strengthening the body’s immune system to fight against damaging external and internal factors such as H. pylori, other bacteria, toxins and fungi.

Siberian Pine Nut Oil has numerous additional benefits. The oil contains polyunsaturated fatty acids, including a significant quantity of fat-dissolving vitamins E and F, which are both known for their physiological and anti-acidic properties. Pine Nut Oil also contains phosphatidic phosphorus, which is a vital source of calcium, magnesium, manganese, copper, zinc, cobalt and iodine.

There are many ways to utilize pine nut oil as a medicinal treatment. Pine nut oil can be ingested 30 minutes to one hour before intake of food over a period of 21-24 days; or diluted with milk using a 1:1 ratio one hour before food intake. Siberian Pine Nut Oil is also an excellent ingredient to incorporate into a raw foods diet as a healthy salad dressing or as a finishing oil to add an extra boost to a meal.

To learn more about the health benefits of pine nut oil, and for inquiries or purchases, please visit http://www.pinenutoil.org or call 248-218-0888.