The Foreign Policy Research Institute is very pleased to announce that Lieutenant General (Ret.) H.R. McMaster has been named to the FPRI Board of Trustees. 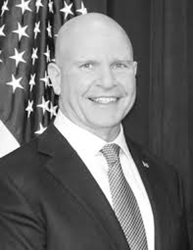 The Foreign Policy Research Institute is very pleased to announce that Lieutenant General (Ret.) H.R. McMaster has been named to the FPRI Board of Trustees. General McMaster is the Fouad and Michelle Ajami Senior Fellow at the Hoover Institution, Bernard and Susan Liautaud Visiting Fellow at the Freeman Spogli Institute for International Studies, and Lecturer in Management at the Graduate School of Business, Stanford University. He was the 26th Assistant to the President for National Security Affairs from 2017 to 2018. He was awarded FPRI’s Benjamin Franklin Public Service Award in 2019, was named one of the 100 most influential people in the world by Time Magazine in 2014, and one of the world’s 50 greatest leaders by Fortune Magazine in 2017.

McMaster served as a commissioned officer in the United States Army for 34 years and held senior positions including the Deputy Commanding General, Futures, of the U.S. Army Training and Doctrine Command (TRADOC). His extensive wartime experience includes Commander of the Combined Joint Interagency Task Force—Shafafiyat in Kabul, Afghanistan from 2010 to 2012; Commander of the 3rd Armored Cavalry Regiment in Iraq from 2005 to 2006; and Commander of Eagle Troop, 2nd Armored Cavalry Regiment in Operation Desert Storm from 1990 to 1991.

H.R. was an Assistant Professor of History at the United States Military Academy from 1994 to 1996 where he taught undergraduate courses in military history and history of the Korean and Vietnam Wars.

A native of the Roxborough neighborhood of Philadelphia, he attended Norwood Academy and Valley Forge Military Academy before receiving an appointment to the United States Military Academy. He was commissioned as an officer in the United States Army upon graduation from West Point in 1984. He holds a PhD in military history from the University of North Carolina at Chapel Hill. He is author of the forthcoming book, Battlegrounds: The Fight to Defend the Free World. Following its release, FPRI will be hosting a book talk with General McMaster, moderated by Robert D. Kaplan on October 16, 2020. He also authored the award-winning New York Times bestseller, Dereliction of Duty: Lyndon Johnson, Robert McNamara, the Joint Chiefs of Staff and the Lies that Led to Vietnam.

“We are very excited and deeply honored to have General McMaster join our Board of Trustees. He is one of his generation’s most preeminent soldier-scholars, and he will bring to FPRI an extraordinary perspective on international affairs and a unique understanding of our nation’s defense and national security challenges,” commented Rollie Flynn, President of FPRI. Chairman of the FPRI Board of Trustees Robert Freedman also added, “H.R. McMaster combines extensive high level practical experience with a scholarly mindset - a perfect fit with FPRI.”

The Foreign Policy Research Institute (FPRI) is an independent nonpartisan 501(c)(3) non-profit think tank based in Philadelphia, PA. FPRI was founded in 1955 by Robert Strausz-Hupé, a former U.S. ambassador. Today, FPRI’s work continues to support Strausz-Hupé’s belief that a “nation must think before it acts” through our five regional and topical research programs, education initiatives, and public engagement both locally and nationally. FPRI is dedicated to producing the highest quality scholarship and nonpartisan policy analysis focused on crucial foreign policy and national security challenges facing the United States.

Find out more at http://www.fpri.org.