The Foreign Policy Research Institute (FPRI) will present its 15th Annual Benjamin Franklin Award for Public Service to H. R. McMaster at its 2019 Annual Dinner on Thursday, November 14, at the Union League of Philadelphia. 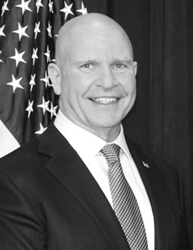 "FPRI has twice been the beneficiary of small private briefings by McMaster, and I recall being quite moved by both his eloquence and his humility" said FPRI President Alan Luxenberg. “We are delighted to bestow upon him the Benjamin Franklin Award for Public Service.”

In a keynote address entitled “Challenges to American Security,” former National Security Advisor McMaster will discuss the key national security challenges that lay ahead -- from the increasing assertiveness of adversaries like China, Russia, Iran and North Korea to the special challenges posed by non-state actors.

"FPRI has twice been the beneficiary of small private briefings by McMaster, and I recall being quite moved by both his eloquence and his humility" said FPRI President Alan Luxenberg. “We are delighted to bestow upon him the Benjamin Franklin Award for Public Service.” As Philadelphia Inquirer columnist Trudy Rubin put it, "McMaster is a strategic thinker with a broad grasp of global issues who is comfortable with complexity, consults widely and listens intently.”

Seating is limited, and both individual tickets ($400) and tables ($3,500 per table of ten) are available for purchase. For information about corporate sponsorship opportunities, please contact Eli Gilman at egilman(at)fpri(dot)org or at 215-732-3774 ext. 103.

H. R. McMaster was the 26th assistant to the president for National Security Affairs. He served as a commissioned officer in the United States Army for thirty-four years before retiring as a Lieutenant General in June 2018. He is currently the Fouad and Michelle Ajami Senior Fellow at the Hoover Institution.

His extensive experience leading soldiers and organizations in wartime includes commander of the Combined Joint Inter-Agency Task Force—Shafafiyat in Kabul, Afghanistan from 2010 to 2012; commander of the 3rd Armored Cavalry Regiment in Iraq from 2005 to 2006; and Commander of Eagle Troop, 2nd Armored Cavalry Regiment in Operation Desert Storm from 1990 to 1991. McMaster also served overseas as advisor to the most senior commanders in the Middle East, Iraq, and Afghanistan.

McMaster led or co-led important strategic assessments including the revision of Iraq strategy during the “surge” of 2007 and efforts to develop security forces and governmental institutions in post-war Iraq.

McMaster was an assistant professor of history at the United States Military Academy from 1994 to 1996 where he taught undergraduate courses in military history and history of the Korean and Vietnam Wars.

He is author of the award-winning book, Dereliction of Duty: Lyndon Johnson, Robert McNamara, the Joint Chiefs of Staff and the Lies that Led to Vietnam. He has published scores of essays on leadership, history, and the future of warfare in many publications including Foreign Affairs, the Wall Street Journal, and the New York Times.

About The Foreign Policy Research Institute
FPRI is a non-profit, non-partisan think tank located in Center City Philadelphia. It is dedicated to producing the highest quality scholarship and nonpartisan policy analysis focused on crucial foreign policy and national security challenges facing the United States. We educate those who make and influence policy, as well as the public at large, through the lens of history, geography, and culture.