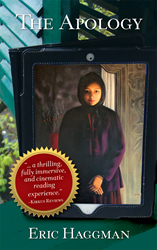 "The Apology" by Eric Haggman

It’s my goal that when readers pick up ‘The Apology’ they find themselves on the streets of the cities and are able to feel the energy of the scenes as Christian and Nachi fight for the truth.

First-time author Eric Haggman has received another rave review for his novel, “The Apology”, by IndieReader, the consumer guide to self-published books and the people who write them. Identifying the cinematic feel of the novel by highlighting its fast-paced storyline and attention to detail in the settings, IndieReader’s review further establishes “The Apology’s” path to being turned into a feature film.

“The achievement of Eric Haggman is that when he does note the setting of this fast-paced adventure novel, it meets the demands of true noir: the country is as much a character as any of the villains.” – IndieReader

“The Apology” takes the reader on a journey from Vietnam to Japan and South Africa in a fast-paced thriller that sheds light on a country’s dark past, a corrupt government and the power of a manipulated press. Protagonist, Christian Lindstrom, is a jet setting ad man who returns to Vietnam to make a tourism video only to face the demons from his past as a Vietnam War veteran. While on assignment with producer and love interest, Nachi Tanaka, Lindstrom gets caught in the cross-hairs of the dark history between Vietnam and Japan leading him to a faceoff with the Japanese mafia – the Yakuza – and a government that will stop at nothing to bury the past.

“I have always had a passion for travel and history, so they naturally made it into my writing. I conducted two month-long location scouting trips with my wife Emily through Vietnam and Japan to ensure that I could capture the countries perfectly when I went to write ‘The Apology’,” said Haggman. “It’s my goal that when readers pick up ‘The Apology’ they find themselves on the streets of the cities and are able to feel the energy of the scenes as Christian and Nachi fight for the truth.”

A compelling aspect of “The Apology” is Haggman’s attention to detail when developing scenes, which is a result of two years of research and travel.

“In the film ‘Apocalypse Now’, director Francis Ford Coppola and screenwriter John Milieus gave a panoramic view of the Vietnam War via a boat trip upriver for a rendezvous with a killing zone overseen by a crazed Special Forces colonel…The same type of panoramic view is provided by Eric Haggman in this haunting noir mystery.” – IndieReader

This is not the first review that points to “The Apology’s” fit for the silver screen. Kirkus Reviews highlighted Haggman’s novel for its “thrilling, fully immersive, and cinematic reading experience”, as well as the “Gloucester Daily Times” who commented that the “action moves cinematically from Vietnam to Japan’s neon-lit urban landscape.”

In addition to the five-star rating, the book has also been “IndieReader Approved”.

“What Raymond Chandler's oeuvre did for sunny, corrupt, and haunting L.A., Eric Haggman's ‘The Apology’ -- an effectively noirish tale -- does for Vietnam.” - IndieReader

“The Apology” is now available for purchase on Amazon. For more information and the official book trailer, visit theapologybook.com.

About “The Apology”:
Filmmaker Christian Lindstrom returns to Vietnam to shoot tourism commercials, only to confront the agony of his past and the power of the Asian underworld to control political events—including the creation and the whitewashing of Japan’s history itself. For producer Nachi Tanaka, it is the story of the shameful sins of the father coming back to hurt and haunt her family generations later. For the Japanese government, it is a coup d’état engineered by powerful business interests with the Japanese mafia -- the Yakuza -- doing their murderous bidding. To learn more about the book, please see the trailer or visit http://www.theapologybook.com.

About Eric Haggman:
A Milwaukee, Wisconsin native, Eric graduated from Colgate University. He lives on the North Shore of Boston, with his wife, Emily and their Ragdoll cat, Shanghai, who thinks he’s a dog.