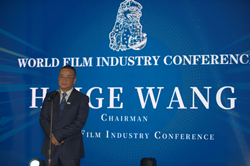 Haige Wang, who is known as the "Cultural Ambassador for World Peace,” has been a professional social and cultural activist serving films and audiences for the past 20 years, promoting Chinese films to the world.

The World Film Industry Conference (WFIC) just wrapped up a successful first symposium. The event took place simultaneously in Los Angeles, CA and Macau, China. Haige Wang, representative of Macau and chairman of the Aollywood Film Workers Association and founding member, was elected as the chairman of the conference for a 4-year term. This is the first time that the organization has elected a Chinese representative as its chairman.

WFIC is a non-profit neutral organization, aiming to establish an international platform for global film connectivity and a community of shared future for the global film industry. The conference included the Global Film Academy Deans Forum, the Global Film Producers Summit Forum, the Global Scriptwriter Creation Forum, the World Audiovisual Technology Forum, and the World Film Festival Chairman Forum. WFIC is the world’s largest, most comprehensive, and most representative top-level conference in the film industry and will be held every two years.

Haige Wang, who is known as the "Cultural Ambassador for World Peace,” has been a professional social and cultural activist serving films and audiences for the past 20 years, promoting Chinese films to the world. "Today is the beginning of a new chapter for me," Wang said.

At a time when the COVID-19 pandemic has had a huge impact on the global film industry, he thanked filmmakers around the world for responding to unexpected challenges with their wisdom and calmness. Haige Wang vowed to build and consolidate trust and cohesion among members, civil society and other international organizations. He said consensus building would be the core of all his efforts, and his top priority was finding a "global solution" to help the film industry get out of trouble as quickly as possible.