Half of U.S. Businesses Use SD-WAN, but Adoption Slowed by Low Cost Savings, Attachment to Legacy IT, per New Study by Altman Vilandrie & Company & Bank Street

New report from Altman Vilandrie & Company and Bank Street shows that half of U.S. business are using SD-WAN but lower than predicted cost savings and attachment to traditional IT make SD-WAN a more evolutionary than revolutionary technology. 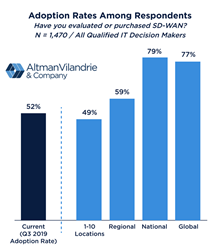 Altman Vilandrie & Company report shows more than half of U.S. business use SD-WAN

Despite all the hype, SD-WAN has shown itself to be less of a game-changer and more of a steady, efficient team player.

More than half of U.S. businesses are using SD-WAN technology, according to a new report from Altman Vilandrie & Company. But despite its solid implementation rate and growth potential, the report shows that SD-WAN will be “more evolutionary than revolutionary,” with seven out of ten IT buyers still holding on to legacy networking technologies SD-WAN was intended to replace. The report, produced in partnership with Bank Street, features analysis from a survey of 300 U.S. IT decision-makers ranging from small-midsized businesses (SMB) and large enterprise firms.

“SD-WAN was expected to revolutionize how businesses network and communicate,” said Altman Vilandrie & Company Principal Mat Grudzien, who oversaw the report. “Despite all the hype, at least so far SD-WAN has shown itself to be less of a game-changer and more of a steady, efficient team player.”

The survey revealed that 52% of U.S. business have adopted some form of SD-WAN technology. Larger enterprises, like national (79%) and global (77%) businesses, have adopted SD-WAN at much higher rates than smaller firms.

As SD-WAN adoption has grown, MPLS (Multiprotocol Label Switching) systems have stuck around, and many IT purchasers say these legacy systems remain integral to their strategies. According to the report, around 70% of SD-WAN buyers report that they still purchase MPLS. Similarly, while SD-WAN allows for easier in-house control and management of a company’s network, approximately 65% of buyers report that they are buying SD-WAN as a solution from a managed service provider, as opposed to taking a do-it-yourself approach to management.

This hybrid approach, in part, has tempered costs savings for SD-WAN deployment compared to the expected massive cost reductions touted at the launch of this new technology. The report shows that more than half of buyers deploying hybrid MPLS / SD-WAN networks are only expecting to save 1%-25% on connectivity costs relative to their pre-SD-WAN spend, with few expecting more significant cost savings.

“The early hype of SD-WAN has been tempered by the reality of cost savings that have been far smaller than some originally projected,” said Atman Vilandrie & Company Director Stefan Bewley. “Still, even with more modest costs savings, the increased control and operational simplification should continue to drive solid adoption rates into the future.”

While the survey was taken before the COVID-19 outbreak started, Grudzien noted that the work from home trends and social distancing restrictions born from the pandemic could impact the future adoption rate of SD-WAN.

“Our survey found that enterprise customers appreciate that SD-WAN doesn’t require in-person installation, particularly for far-flung regional branches,” said Grudzien. “This is important now: with our homes currently serving as local branches for millions of companies, opportunities exist for SD-WAN to enable this new type of a remote workplace. With that said, it is unlikely many IT departments will undergo large overhauls in the current environment, which may delay the SD-WAN tailwind.”

Altman Vilandrie & Company and Bank Street are planning to collaborate on updated survey and report on SD-WAN for later this year. To see the entire report, please visit http://www.altvil.com.

Ninety percent of the boutique firm’s corporate clients are large- to mid-cap companies including service providers, technology and software developers, and media companies. Altman Vilandrie & Company’s financial clients include many of the largest and most prominent investors in the telecom, media, and technology markets.

About Bank Street
Bank Street provides insightful and objective advice to help corporate and institutional clients achieve their financial and strategic goals. Bank Street is a private investment banking firm primarily serving growth companies in the communications, media, and technology sectors with a comprehensive array of services, including Merger & Acquisition Advisory, Debt and Equity Financing, and Restructuring Advisory. The firm’s senior professionals leverage a combination of extensive transaction experience and deep industry expertise to deliver outstanding results for its clients.