Chaps is bringing their Famous Baltimore Pit Beef to the Philadelphia area via a local sportswriting legend. 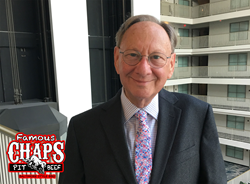 Chaps is unique. It's almost like a cult. Only tastier.

What do baseball and Chaps Pit Beef have in common? More than you might think. Baseball is what led new Chaps Pit Beef franchisee owner, and Hall of Fame baseball sportswriter Paul Hagen to open his first business at the age of 69.

A huge fan of Famous Chaps Pit Beef’s delicious brand of barbecue, Hagen first discovered it while covering the Phillies and Major League Baseball for the Philadelphia Daily News. In that job, he would often drive to Washington, D.C. and Baltimore to cover Phillies games. On these trips he would frequently carpool with baseball writer Jim Salisbury.

It was during one of these road trips that Salisbury mentioned seeing a profile of a great sandwich place called Chaps on the Food Network’s “Diners, Drive-Ins & Dives“. They stopped in for a taste at the flagship Baltimore location – and both immediately loved it!

Ever since then he has continued to enjoy Chaps Pit Beef whenever he could get to Baltimore or Aberdeen, MD, finding joy in introducing it to family and friends.

Hagen, who joined MLB.com in 2011, was awarded the J.G. Taylor Spink Award by the Baseball Writers’ Association of America in 2013 at the annual National Baseball Hall of Fame awards presentation in Cooperstown, New York.

In January, 2018, Hagen stopped writing full time and began to think about what the next chapter of his life would look like. It didn’t take long for him to decide that he wanted to start his own business. Opening a Chaps BBQ franchise was the logical option.

“Chaps is unique. It's almost like a cult. Only tastier,” says Hagen.

“I loved the food at Chaps Pit Beef the first time I tried it. Everybody I know has loved it the first time they tried it. That's the basis for everything we've done. I think those who haven't had a chance to try it before will love it, too. But what's really surprised me is how many people in Delaware County and the surrounding areas are already aware of Chaps and really seem to appreciate that we're bringing it closer to them. There have been countless times when people have come into the store or stopped outside to ask when we're opening. And they invariably follow it up with, ‘We can't wait!’”

Chaps Pit Beef started in small roadside shack in Baltimore, MD over 30 years ago. Recently named the best sandwich in Maryland by People Magazine, their award-winning sandwiches are known nationally and have been featured on the Food Network, Diners, Drive-Ins and Dives, CBS, the Travel Channel, The New York Times and countless other publications.

Hagen’s new Chaps Pit Beef franchise is located at 1083 W Baltimore Pike in Media, PA, a newly developing area at the site of the old Granite Run Mall across the street from Riddle Hospital.

The location has a special significance to the Delaware County area. It’s right next to where the old Riddle Ale House, a popular local restaurant known for roast beef sandwiches, once stood. Now those customers can get an even better beef sandwich experience at Chaps!

Chaps Pit Beer in Media, PA is now open to the public.

For more information on this and other Chaps franchises, visit Chaps Franchise Locations.