Research shows how organs-on-a-chip can test 96 tissue models at once. 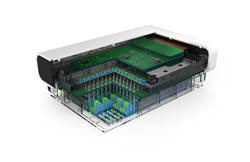 “Novel drug discovery efforts suffer from increasing costs and low probability of clinical trial success. Organ-on-chip technology has the potential to greatly aid the development of new therapies,” according to a new research paper led by Draper and Pfizer.

As models of organs on-a-chip (OOC) become major tools to aid drug discovery, toxicity screening and efficacy testing, scientists are making progress in developing clinically predictive test environments for these tiny tissue models. Now, a series of proof of concept experiments led by Draper and Pfizer has demonstrated progress toward that standard. Researchers have developed a high throughput OOC platform that expands the potential uses of OOC and positions it to more broadly improve disease research and drug development.

As reported in Lab on a Chip, Joe Charest and colleagues have developed a tunable organ-on-chip microenvironment that can generate physiologically relevant responses in four human organ tissue models. Using an instrumented microfluidic culture plate (MCP) in the standard well plate footprint with 96 individual tissue models and different sensing modalities, the researchers demonstrated the ability to monitor tissue metrics such as gene and protein expression, oxygen consumption and barrier function.

The team seeded, grew and tested the human tissue models in Draper’s PREDICT96 high-throughput microfluidic testing platform. Unlike most microfluidic testing platforms that have fewer than a dozen replicates, Draper’s platform can hold 96 individual organ tissue models in one microfluidic culture plate. A key feature is a culture plate lid that provides integrated pumping and sensing, including 192 individual and actively-controlled micropumps and 384 individually addressable electrodes configured to make electrical measurements within each of the 96 tissue models.

Integrated into the platform, a number of sensors gathers data to guide researchers as they monitor and adjust the various biochemical and biophysical cues in the tissue models. The platform allows researchers to tune the microenvironment with precision. An example described in the paper is a series of experiments that manipulated the tissue microenvironment to produce colon tissues that varied in ways important in drug discovery and toxicity testing, including barrier integrity, differentiated cell-cell boundaries and tissue response to certain chemicals.

A goal of the experiments is to produce a next-generation OOC system with on-line integrated sensing capabilities that maintains downstream compatibility with high content screening (HCS) and RNA sequencing (RNA-seq) while enabling high-throughput interrogation of many tissue culture conditions simultaneously, or a large number of replicates for a few culture conditions. Toward that end, the research team leveraged the compatibility and throughput of the platform to screen all 96 tissue models using HCS and evaluate gene expression using RNA-seq.

The end goal, said the researchers, is to improve efforts at finding the next therapies and medicines. “Novel drug discovery efforts suffer from increasing costs and low probability of clinical trial success, largely due to a lack of predictive preclinical in vitro models and reliance on animal testing which often fails to accurately capture human response. Organ-on-chip technology has the potential to greatly aid the development of new therapies,” the authors said.

Information about PREDICT96 including customer deployments and additional research is available at Draper.com.

Coauthors are employees of Draper, Pfizer and Boston University. Principal investigators are Hesham Azizgolshani, Jonathan Coppeta, Brett Isenberg and Else Vedula of Draper.

Draper
At Draper, we believe exciting things happen when new capabilities are imagined and created. Whether formulating a concept and developing each component to achieve a field-ready prototype or combining existing technologies in new ways, Draper engineers apply multidisciplinary approaches that deliver new capabilities to customers. As a nonprofit engineering innovation company, Draper focuses on the design, development and deployment of advanced technological solutions for the world’s most challenging and important problems. We provide engineering solutions directly to government, industry and academia; work on teams as prime contractor or subcontractor; and participate as a collaborator in consortia. We provide unbiased assessments of technology or systems designed or recommended by other organizations—custom designed, as well as commercial-off-the-shelf.