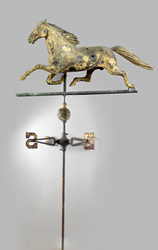 Kaminski Auctions' June 1st and 2nd sales feature a selection of fine Chinese porcelains on Saturday, June 1st, followed by the contents of a Manhattan, NYC estate in the afternoon. Sunday, June 2nd features items from Beverly, Ipswich and Salem, Massachusetts estates. Both auction days start at 10:00 AM EST in the Kaminski Auction gallery at 117 Elliott Street, Rt. 623, Beverly, Massachusetts.

Asian highlights include a fine 18th-century Chinese porcelain brush pot, delicately painted in cobalt blue, with a continuous landscape scene depicting scholars in leisurely pursuits. Another 18th-century Chinese blue and white gourd vase is decorated with a The Three Kingdoms scene, depicting characters in a garden below the slender neck. Both have the reign mark of Yongzheng. There is also a Chinese Guan type gourd vase with a pear-shaped body rising to the tall neck covered in a bluish-grey glaze. This vase also bears the Yongzheng mark.

Another, 19th century large Chinese blue and white vase is superbly potted, with a globular body, delicately painted with leaves and flower blossoms in the 17th-century European style, also bearing the Yongzheng mark. A 19th-century Chinese blue and copper-red dragon fishbowl painted in underglaze-red with five ferocious five-clawed dragons in various positions, amidst flames, cobalt-blue clouds and breaking waves, bears the reign mark of Qianlong. It measures 17 inches in diameter.

Chinese porcelain continues with a Chinese Famille Rose vase decorated with figures, with the red seal of Yi Shuo Tang Zhi on the base. It measures 12 inches high and is from a Georgia estate. A Chinese blue and white porcelain plate with a pine tree, bamboo, and plum flower tree design, with the Ming Chenghua mark on the base, hails from a California collection.

Chinese furniture on offer includes a pair of Chinese Zitan armchairs, a finely carved Huanghuali wood stand and an antique Chinese five-panel wood screen, having hand-painted black and gold decorated panels, and signed on the back.

European art features two French artists. The first is a lively Paris street scene by Antoine Blanchard (French, 1910-1988), and the second painting is by Henri-Joseph Harpignies, the French landscape painter and member of the Barbizon school.

A large painting by the British artist George Henry Bogert (1864-1944), of Chale Church, Isle of Wight' is quite impressive in its' ornate gilt frame. The oil on canvas is signed lower left, and dated 1894 verso. The landscape measures 35 inches x 55 inches sight, and 49 inches X 72 inches framed. A similar view of this location by Bogert was in the Metropolitan Museum in the early 1900s. This painting is estimated to bring $8,000-$12,000.

A British sculpture by Sir Anthony Caro (British 1924-3013), titled 'The Red Menace', is a painted Tycore sculpture, and bears the signature 'Caro' verso and bears the title and date 'The Red Menace 1989', as well as the inscription, 'Twenty Elements', 'Fabricated Triangle Workshop with Paul Chaleff . It is estimated to bring $5,000-$15,000.

Cape Ann art collectors will be sure to take note of a William Meyerowitz, Gloucester scene of boats at a dock, a Joseph Kaknes, a landscape of Annisquam, and an Elizabeth Miller Lobingier (American, 1889-1973), which is an abstract oil on canvas of Gloucester sailboats. Also, of interest to Cape Ann collectors is a collection of Folly Cove Design block printed fabrics, which includes, placemats, table runners, and a small table cloth. The lot consists of seven pieces total in total with the table cloth measuring 33 inches square, from a Gloucester, Massachusetts collection.

Other name pieces include a set of four, circa the 1950s, Eero Saarinen tulip chairs in off-white, and an Isamu Noguchi for Herman Miller cocktail table, model IM-50, with a painted black base.

Silver highlights include two sets of Georg Jensen sterling flatware, in the Acorn pattern and several lots of George Jensen sterling silver serving pieces. There is also a table service for twelve of Royal Crown Derby porcelain, in the Imari pattern from an Essex, Massachusetts collection.

Vintage couture collectors will take note of a selection of designer woman's handbags from a Palm Beach estate. A Giorgio Armani lizard handbag that initially cost $7000, a Judith Leiber ostrich handbag, a Celine of Paris signed handbag, and a Nancy Gonzalez, orange lizard handbag, are all on of offer in day two of the auction.

Various other items of interest to collectors include an old terrestrial globe on a stand by the firm of W. & A. K. Johnston, Edinburgh, Scotland, a cello, a stamp collection and for doll collectors there is a lot of assorted silver miniature doll furniture, as well as a 1970, French Jumeau bisque head doll, and an Armand Marseilles 100 bisque head doll.

Preview times at the Kaminski Auction gallery at q117 Elliott Street, Beverly, Massachusetts are Tuesday, May, 28th-Friday, May, 31st, 10:00 AM-5:00 PM and days of the sales at 8:00 AM. Preview is open while the auction is live. For more information and to sign up to bid with KaminskiLIVE go to http://www.kaminskiauctions.com