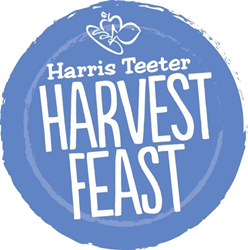 Harvest Feast Round Up Campaign Logo

Harris Teeter announced today the launch of its Harvest Feast Round Up Campaign. Now through Dec. 27, Harris Teeter shoppers are invited to round up their transactions to the nearest whole dollar at checkout; 100% of funds raised will benefit hunger relief partners in local communities.

In 2021, Harris Teeter shoppers and associates donated $1.5 million through last year’s Harvest Feast campaign for those facing food insecurity. The Company hopes to raise even more money during this year’s campaign as the number of children and families living in America who are facing hunger and food insecurity are at an all-time high. According to Feeding America, due to the lasting effects of COVID-19, more than 38 million people face food insecurity. Nationally, the USDA reports that more than 12 million children live in a food insecure household.

Since 2005, Harris Teeter’s Harvest Feast Round Up campaign has raised more than $10 million in monetary donations and hundreds of thousands of pounds of nonperishable food.

“The number of hardworking families, including children, seniors and veterans, within our communities who do not know when they will have their next meal, is astonishing,” said Danna Robinson, Director of Corporate Affairs for Harris Teeter. “More and more families in our communities rely on the help of our food bank partners which is why it is so important to Harris Teeter to provide a convenient way for shoppers to give back.”

Harris Teeter is proud to partner with 19 agencies throughout its marketing areas to help eliminate hunger for food insecure families throughout the year. Both Harris Teeter’s food bank and food pantry partners are assigned stores within their service areas to ensure 100% of the funds collected through this campaign remain local to the community in which the donation is made.

“We are continuously overwhelmed by the generosity of our valued associates and shoppers who help us provide millions of meals to our community members-in-need each year. It is important to remind our shoppers that every dollar raised at their Harris Teeter will go directly to serving hungry families within their community,” said Robinson.

The success of Harris Teeter’s Harvest Feast campaign hinges on the generosity of its loyal shoppers and valued associates. Supporting our neighbors-in-need is more important than ever and Harris Teeter hopes for continued participation again in 2022.

To learn more about Harris Teeter’s Harvest Feast Round Up campaign, click here.