Donation equals 15 million meals for those struggling with hunger 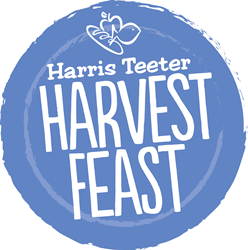 Harris Teeter would like to extend a sincere thank you to its loyal shoppers and valued associates who donated more than $1.5 million to local food banks during its Harvest Feast Round Up Campaign. Throughout the months of November and December, in all Harris Teeter locations, shoppers and associates were invited to round up their transaction to the nearest dollar.

The financial contributions made through these efforts equates to 15 million meals* which food banks and food pantries in Harris Teeter’s marketing areas can supply to the community members they serve.

“Harris Teeter is proud to support its local food bank partners and their mission to end hunger,” said Danna Robinson, communication manager for Harris Teeter. “We are extremely thankful for our generous shoppers and valued associates who help feed our food-insecure neighbors each year.”

Harris Teeter would like to thank its media partners Cox Cable, Spectrum and WRFX for assisting with the promotion of the Round Up campaign.

For more information about Harris Teeter’s Harvest Feast Round Up Campaign, click here.

*According to Feeding America, $1 can produce up to 10 meals