Have You Been Probed by an Alien Lately? PsychTests Researchers Release the Latest Data from Their Paranormal Beliefs Test

In the spirit of Halloween, researchers at PsychTests.com reveal statistics from their assessment of modern paranormal beliefs, including people’s attitude toward ghosts, aliens, and psychics. 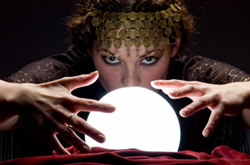 Even though paranormal experiences may not be very common, people are still willing to entertain the idea that there are still many unknowns that can’t be easily explained.

You can’t really kill the concept of the occult and of mysticism…it’s human nature to be curious about and drawn to the unknown.

Most people will likely admit that they are at least a little entranced by the idea of spirits, succubus, and sea monsters. Entertaining the possibility of the paranormal, of making the unknown known, is human nature. It’s why people instinctively knock on wood to ward off a cruel twist of fate, hesitate to cross the threshold of a haunted house, or why billions of dollars are being spent to discover life in distant galaxies. A recent study conducted by PsychTests.com reveals that while only a small percentage of people have had what could be considered a paranormal experience, belief in the supernatural is still very much alive.

Analyzing data from 2,172 individuals who took the Paranormal Beliefs Test, PsychTests’ researchers uncovered some rather interesting statistics. Here are some interesting tidbits from their study.


WHO ARE THE BELIEVERS?

“Although paranormal beliefs have most certainly evolved over time, it’s interesting to see that not all supernatural convictions and superstitions have died out,” states Dr. Jerabek, president of PsychTests. “The expansion of scientific exploration diffused and disproved a lot of phenomena that were once considered paranormal, but you can’t really kill the concept of the occult and of mysticism…it’s human nature to be curious about and drawn to the unknown. This isn’t to say that all phenomena perceived as ghosts are actual ghosts, and that every unidentified flying object is an intergalactic visitor, but people are very much willing to entertain the possibility. We are drawn to the paranormal because it’s a mystery that we have yet to fully solve.”

Only a lucky (or unlucky) few have come face to face with the supernatural or the unexplained.Here are some of the most common paranormal experiences