Not being able to say “no” to demanding family members this holiday season could cost you more than money, according to a study by PsychTests.com. 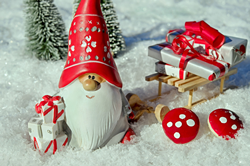 The holiday spirit is about being kind and generous, not about letting people walk all over you.

Constantly putting others first and not voicing your wants and needs will leave you feeling helpless, unhappy, and resentful.

The holidays are all about the spirit of giving. According to a a Consumer Reports article, people spend approximately 42 hours on holiday shopping…although one can argue that most of that time is spent in the parking lot searching for a free space. The holiday spirit also encourages us to be kinder and more flexible, even when annoying family members demand more of our time, energy, and patience than we’d like to give. After all, saying “no” and putting our needs first doesn’t align with the holiday season. However, researchers at PsychTests insist that being more assertive with family and putting our foot down is a must.

Here’s what the study revealed:

“We’re often reluctant to say ‘no’ to family because, well, they’re family. We don’t want to be perceived as selfish, difficult, or even ungrateful, as might be the case when saying ‘no’ to our parents or people who have done favors for us,” explains Dr. Ilona Jerabek, president of PsychTests. “However, it’s important to understand - and I can’t stress this enough - that being assertive doesn’t mean you are selfish, rude, or aggressive. Nor does it involve yelling at people or venting all of your grievances about them. Asserting yourself means placing reasonable limits on what you will allow people to ask of you or say to you, and enforcing those boundaries, calmly yet firmly, when they are crossed. So if, for example, Christmas dinner is at your place and your mother-in-law insists on taking over the cooking, don’t let the spirit of the holidays lull you into compliance. Use this assertiveness template:

I know you want to help me prepare dinner and I appreciate it.

But I feel frustrated and discouraged

When you take over and insist on cooking

Because I feel like you don’t trust my cooking skills and it makes it harder to keep things flowing in the way I want them to.

I’d really appreciate it if you would either ask me if you can help with something, or simply enjoy the party with the rest of the guests.

“If your mother-in-law or anyone else you assert yourself with doesn’t like it, that’s not your issue, it’s theirs. As we have seen with the unassertive group in our study, constantly putting others first and not voicing your wants and needs will leave you feeling helpless, unhappy, and resentful. You won’t end up hating others for taking advantage of you, you’ll end up experiencing a great deal of self-loathing for not standing up for what you want. So, our lesson for the holidays is: Be kind and assertive, and put others first only if doing so brings you both joy. Santa Claus knows that it’s sometimes necessary to put people on the naughty list, and so should you.”

What’s your EQ? Take the Emotional Intelligence Test at: https://testyourself.psychtests.com/testid/3979

Being assertive and saying “no” is sometimes necessary, even during the holidays.Here’s what happens when you constantly - and grudgingly - put others first: