Company adds $5 million to back founder Louis Borders’ mission to transform ecommerce from the ground up; HDS Global attracts even more industry leaders from the robotics and commerce sectors as the company moves towards commercial release 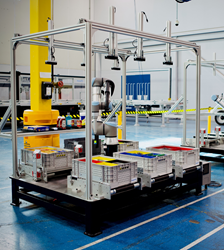 HDS Global has become the first ecommerce company in the world to debut a fully automated robotic fulfillment system at its Technology Center.

Home Delivery Service (HDS Global), the personalized ecommerce delivery service powered by RoboFS, its proprietary touchless robotic fulfillment system, today announced that it has become the first ecommerce company in the world to debut a fully automated robotic fulfillment system at its Technology Center. The Technology Center is now officially open to demonstrate the revolutionary solution HDS Global built from the ground up to solve problems inherent in existing ecommerce systems.

In addition to the completion of its Technology Center, the company also announced $5 million in strategic investments from prominent individuals, including Michael Marks, Founding Managing Partner of Celesta Capital; Eduardo Castro-Wright, the former Vice Chairman and CEO of Walmart USA; and Rudy Salas, former SVP Coca Cola, CCNA Bottler Strategy and LAG Customer and Commercial Leadership. HDS Global’s consortium of investors spans tech, retail and academia. HDS Global has also added a number of experts in commerce and robotics to its team as it prepares to go to market.

Funding the Future of Ecommerce
HDS Global designed and built its own fulfillment solution to execute on Borders Books and Webvan Founder Louis Borders’ vision for a modern ecommerce company that can deliver goods in a highly efficient manner that simultaneously reduces costs.

“There is no other fulfillment system in existence that can provide the kind of service we imagined. In fact, no one has even come close, which is why we knew that for HDS Global to reach its potential, we had to build it ourselves,” said Borders. “Although this called for a more strategic approach and an adjustment in our timelines, the result has far exceeded expectations. RoboFS is a fundamentally different, comprehensive solution that will enable us to fully meet strong market demand upon commercial release.”

HDS Global’s Technology Center, based in Indianapolis, was designed to demonstrate its high-throughput technology built for rapid rollout and 50% lower cost of operation than today's systems. After successfully debuting RoboFS last month, potential customers, partners and institutional investors who visit the Center can now see exactly how RoboFS will be implemented at scale for HDS Global’s ecommerce rollout.

Talent Breeds Talent
To build the first fully automated robotic fulfillment system, HDS Global has attracted world-class talent across all facets of the organization, including its investors and advisors. By working with several innovative Global Fortune 500 heavyweights and industry veterans with bankable track records in robotics and ecommerce, HDS Global has been able to apply highly specialized expertise to overhaul today’s fragmented ecommerce system. Through the team’s collective insights, HDS Global has already refined the development of RoboFS into a production-ready fulfillment system, which could not come at a better time as the U.S. experiences deep supply chain issues and rising costs for consumer goods.

HDS Global’s company directors include Craig A. Leavitt, former CEO of Kate Spade, and Sujeet Chand, CTO of Rockwell Automation, while Bob DiRomualdo, Chairperson and Chief Executive Officer (CEO) of Naples Ventures and former Chairman of the Board of Directors at Ulta Beauty (NASDAQ: ULTA), joins as HDS Global’s advisor.

Adding to its impressive roster, HDS Global also announced the appointment of several veterans to its operating team. Chris Visnic, the former Vice President of Sales at Seegrid Corporation and the Global Simulation Lead at Autodesk Incorporated, has joined HDS Global as the President of RoboFS. Visnic has demonstrated success in leading teams that sell, implement and support material handling automation to the world’s largest companies in manufacturing, distribution, logistics and fulfillment.

Mitchell Weiss, the former CTO at Seegrid and Brooks Automation, has joined HDS Global as Chief Robotics Officer. Weiss has delivered bankable results over three decades as a world-class leader in developing and manufacturing collaborative robots for market-leading companies in the Industrial Automation industry. He was also the original builder and designer of Seegrid’s flagship product, which was recently voted the #1 mobile robot by Interact Analysis.

And Joe Mirabile, a former executive at Seegrid and FedEx, has been named Vice President of Technology Operations. Mirabile has developed industry leading application, engineering and implementation teams that successfully delivered autonomous mobile robot (AMR) technology to more than 400 facilities globally, including those at market leaders such as Amazon, Walmart, General Motors, USPS, UPS, Whirlpool, Jaguar Land Rover and Caterpillar.

“HDS Global is pushing robotics and automation into new territory, which is tremendously exciting,” said Weiss. “To see RoboFS in a production environment allows decision makers to envision what ecommerce could be, which is a magical experience for consumers at a lower price point than ever before. The Technology Center moves our idea beyond concept to show that this is for real.”

“We have a bold vision for the future, and to execute, it is critical to have the right people in place throughout the organization,” added Borders. “Because we have been able to attract and hire the best, and because we have brought in the right investors and partners at the right time, we are in a unique position to cross the chasm for ecommerce grocery and become a recognized full-service ecommerce market leader. As with Borders and Webvan, HDS will have a significant, beneficial impact on quality of life for its customers.”

Founded by Louis Borders, Home Delivery Service (HDS Global) is transforming ecommerce – end-to-end – leading with fresh groceries and including a broad, deep and brand-filled general merchandise selection. Powered by the latest in AI and advanced robotics, the company’s patented automated fulfillment system, RoboFS, enables touchless order fulfillment, resulting in fresher-than-store goods delivered direct to the customer’s door with free same-day delivery and premium one-hour service. The company has also developed a novel user experience, personalized around the dietary needs and desires of each individual customer. With its bold vision and innovative technology, HDS has secured funding partnerships from the world’s leading brands, including Ingram Micro and Toyota. The company is headquartered in Palo Alto, CA.

For more information, please visit http://www.hdsglobal.com, and to learn about the technology that powers HDS, visit: http://www.robofs.com.