He Was Saved From Death And Destruction, But Still Battles Bitterness and Despair 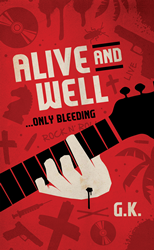 Although the story is Christian fiction, I feel it can reach a broader audience based on the contemporary issues brought out in the story

Baker Faraday was a prodigious guitarist with nothing but bright lights and fame before him until he was shot. Lying on the street with bullet holes through his left side and left hand, he reaches in desperation for a foreign concept, and prays. His prayers are answered, and Baker regains his God-given ability and becomes a disciple through music by assembling a Christian rock band known as Alive and Well. But his hand is never the same and the band doesn’t meet with the kind of success he’d hoped for. Was it all a mistake?

Meanwhile, a young man named Lorenzo struggles to start over after he nearly ruined his life with gang violence and drug addiction. Haunted by the memory of the man he left for dead; the Holy Spirit is his only hope of survival.

“Although the story is Christian fiction, I feel it can reach a broader audience based on the contemporary issues brought out in the story,” said G.K.

G.K. last darkened the church door at eight years old. Morally adrift, the author led an iconoclastic life of self-gratification, depriving himself of virtually nothing. Embraced in heavy drinking and recreational drugs as a young man, his writing career bounced half-deflated through fly-by-night publications, from dive bar reviews to a quixotic travel column, from a music critic to landing as a published roaster of professional athletes, always finding an easy landing through criticism, as disparaging remarks came easily. Then something changed. Marriage happened, three children ensued, and God reappeared. By His Grace, G.K. spun the wheel away from former habits and composed the first part of a fictional story, hoping to glorify the Heavenly Father through good works now and in the years to come.

Xulon Press, a division of Salem Media Group, is the world’s largest Christian self-publisher, with more than 15,000 titles published to date. Alive and Well…Only Bleeding is available online through xulonpress.com/bookstore, amazon.com, and barnesandnoble.com.