The program delves into how a body/mind connection may be useful for those suffering from PTSD symptoms. 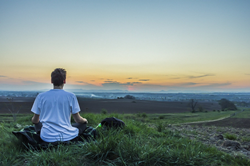 Yoga brings an awareness of breathing and how an individual’s body feels and is very soothing for both body and mind.

American playwright, actor, director, producer, and screenwriter Laurence Fishburne is the host of the educational TV program “In Depth”. The show highlights a large variety of subjects that uniquely impact viewers around the world. A new episode will discuss wellness options, for example yoga, for treating veterans with PTSD.

Some people develop Post Traumatic Stress Disorder (PTSD) after witnessing or undergoing a life-threatening event, such as combat. It is typical for veterans to experience PTSD after time at war or in life-threatening situations. Symptoms of PTSD may include issues with sleeping, avoidance of situations that bring back traumatic memories, anxiety, depression, or heightened reactions. Sufferers with PTSD are in a continuous fight or flight cycle. This cycle causes constant stress and anxiety, which is both physically and mentally exhausting and can harm the immune system. As a result, many veterans with PTSD suffer from substance abuse to treat their symptoms.

There are several treatment options for those who have PTSD. Therapy and medications can help, as well as yoga and other physical activities. Yoga brings an awareness of breathing and how an individual’s body feels and is very soothing for both body and mind. This type of physical activity, paired with a stress relieving atmosphere, can help provide the brain with a repeated good experience, which helps veterans, and other people living with PTSD, to feel safe again.

The upcoming episode of “In Depth” will explain more about how these types of activities are helping veterans with PTSD.

“In Depth” with Laurence Fishburne is carefully reviewed before broadcast to a public viewing audience. The show has received several accolades for its efforts in the public television arena.