Hear the Effects of War from Someone Who Experienced it Firsthand

Mill City Press shares the story of a man who escaped the Laos War. 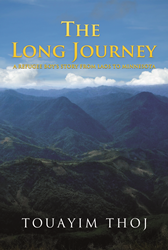 Readers will find how the war in Laos affected our lives, physically and psychologically, during and after the war was over

Thoj’s father worked hard as a village council delegate in Laos, but was eventually forced to flee from his home. After years of running, Thoj eventually spent two years in bad conditions in the Ban Vinai Refugee Camp in neighboring Thailand. Finally, he was able to come to the U.S. as part of the minor refugee program and begin a new life.

“Readers will find how the war in Laos affected our lives, physically and psychologically, during and after the war was over,” said Thoj.

Touayim Thoj graduated from high school in Saint Paul, MN, served in the Iraqi War with the U.S. Navy and earned his Bachelor’s degree from Winona State University.

Mill City Press, a division of Salem Media Group, is a leader in the general market division of self-publishing. The Long Journey is available online through amazon.com and barnesandnoble.com