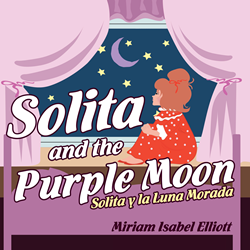 “Solita and the Purple Moon” By Miriam Isabel Elliott

"I wanted to bring awareness for what these children go through when their parent cannot tuck them in every night or is not present every day. Solita and her new friend will show children who are separated from their mom or dad that they are not alone."

Many children worldwide are separated from their parents due to their mother or father being deployed for war. In Miriam Isabel Elliott's debut bilingual children's book, “Solita and the Purple Moon,” she provides a heartwarming story that will help kids who are missing their loved ones through an imaginative friendship.

The book follows a young girl named, Solita, whose mother is serving her country, and how much she misses her every night. Elliott pens a poetic and straightforward story that describes a child's feelings while they are separated from their parent and creates an imaginary friendship in search of hope and understanding. Solita finds refuge in her bedroom at night, looking outside her window to process missing her mother.

As she is looking outside her window one evening, Solita discovers a smiling purple moon that blossoms a beautiful friendship. Her new friend embodies the maternal instinct of a mother and the cleverness of a teacher. The moon becomes comforting and playful, devoting her time and companionship to a child in need. Readers will witness Solita going on an adventure with her new friend, who shows the young girl the beauty of her country, making the days she is away from her mother go by even faster.

"'Solita and the Purple Moon' was inspired by my granddaughter Madison when her mom was deployed to Iraq," said Elliott. "I wanted to bring awareness for what these children go through when their parent cannot tuck them in every night or is not present every day. Solita and her new friend will show children who are separated from their mom or dad that they are not alone."

Ultimately, “Solita and the Purple Moon” will bring attention to the sacrifice of the children of service members. Readers will be able to use their imagination throughout the pages and be introduced to a powerful friendship.

About the author
Miriam Isabel Elliott arrived in the United States from Cuba in 1970, along with her mother and brother, searching for the opportunity and freedom denied to them by a communist regime. Elliott has two daughters, Rebecca and Melissa, both of whom were born in the United States. It has always been her mission to teach her children to value their freedom and to love America. Through her work, the author's intention is to honor the children of the American military during these difficult times and to bring attention to their silent sacrifice. Elliott's found inspiration for "Solita and the Purple Moon" when her daughter, Melissa, a United States Marine, was serving Iraq and how that affected her daughter, Madison. Elliott resides in North Arlington, NJ. To learn more, please visit https://www.miriamelliott.com/.