Author Heather Shropshire has written an enthralling story that takes readers to a world of danger, quests and magic. 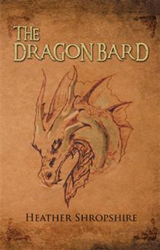 There are very few legendary creatures in the known world more iconic than the dragon; this is because almost all cultures in the world have a variation of the dragon in their myths and legends, whether it is the European dragon which was the personification of evil in the medieval ages, or the Asian version which symbolized wisdom and immortality. In “The Dragon Bard,” author Heather Shropshire has written a highly engrossing tale about these magnificent creatures.

“The Dragon Bard” is the first in a two-book series about a young bard named Dalen. In the beginning, Dalen is the typical young man looking to become a master bard to gain fame and fortune. He inherits a set of “dragon treaties” from his former master and decides to achieve his goals by telling the histories of the dragons from their point of view. At first, the quest seems to be fairly straightforward, although he quickly finds that nearly all of his preconceived ideas about dragons are wrong. Looking at things from the point of view of an ancient intelligent race causes Dalen to reassess his goals and values. As his quest progresses, he learns that the “treaties” are much more than they seem. Guided by forces far beyond his control, he becomes enmeshed in a centuries-old conflict between the forces of good and an ancient spreading evil, and learns that the things he had thought were important pale alongside the truly important values of honor, humility, faith, courage, and self-sacrifice.

This immersive and fantastical read is a heady combination of the swords and magic genre with a dash of political intrigue. “The Dragon Bard” is a must have for fantasy aficionados.

About the Author
Heather Shropshire, a music director in Wyoming, grew up in a university setting. An avid lover of animals and the natural world, she has eclectic interests varying from music to history/archeology/paleontology and animal behavior. She spent a large portion of her time either on campus with her father, a physics professor at Idaho State University, or with her mother, a small animal/exotic animal veterinarian. Her upbringing taught her to appreciate and respect various cultures and perspectives.