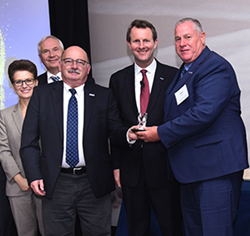 Heilind Electronics, a leading global distributor of electronic components, was recognized with the Best North American Performance in Distribution award by Amphenol. The award was presented to Heilind executives by Amphenol CEO Adam Norwitt at the company’s annual EDS reception held on May 8 in Las Vegas, Nevada. This is the third time in the last four years that Heilind has earned the best distributor in North America for Amphenol, which is one of several honors Heilind received at EDS – including being named the #1 electronics distributor by Bishop & Associates.

"This achievement speaks to the strength and depth of our partnership, with Heilind more than doubling the total channel growth,” said Alan Clapp, Vice President of Supplier Business, Heilind Electronics. “To once again be acknowledged amongst Amphenol’s many North American distributors is a reflection of our ongoing commitment to innovation, supply chain integrity and service excellence."

As an authorized distributor for more than two dozen Amphenol divisions, Heilind Electronics is one of the manufacturer’s leading distributors globally.

Heilind Electronics, Inc. (http://www.heilind.com/) is one of the world's leading distributors of connectors, relays, sensors, switches, thermal management and circuit protection products, terminal blocks, wire and cable, wiring accessories and insulation and identification products. Founded in 1974, Heilind has locations throughout the U.S., Canada, Mexico, Brazil, Germany, Singapore, Hong Kong and China. Follow Heilind on Facebook at facebook.com/Heilind and on Twitter at twitter.com/Heilind.