Marijuana Anthem Download, "I Love Marijuana" by the Hemp Potter 4 beamed into Deep Space for first Extraterrestrial Contact with Rock and Roll. 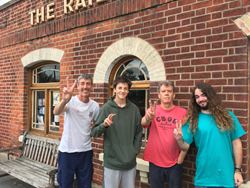 The Hemp Potter 4 hope to immortalize themselves and their music by making first contact with Alien life. Chances are Intelligent Extraterrestrial beings won't hear "I Love Marijuana" until centuries after the band and Manager Mickey Michaels have passed but who knows, maybe the Aliens can somehow clone them via their audio sound waves and restore them to human life in the future.

The Hemp Potter 4 consists of the father son team of Dave English on lead Vocals, Alfie English, bass, Darrell Mayhead, guitar and of course Eddie Edwards on drums. Mickey Michaels manages and cowrites with the band and decided that Outer Space is the next musical frontier. The Hemp Potter 4's musical influences include the great Bo Diddley, Howlin' Wolf, The Downliners Sect, The Kinks and the Stooges and aim to make Rock fun again instead of being Politically Correct. Party On

The Story of "I Love Marijuana"

Manager Mickey Michaels, an occasional social pot smoker took notice that there weren't that many Marijuana Rock Songs in an era where Marijuana seems to be legalized each day. So he decided to write a Marijuana Anthem: "I Love Marijuana." The idea was to incorporate the basic phrase "I Love Marijuana" with a strong Bo Diddley beat powered by Eddie Edwards drumming. Michaels set up the basic gist of the song to Eddie and Eddie and The Hemp Potter 4 expanded on the original lyrics and Mickey's ideas. Pat Collier, a co-founder of The Vibrators with Eddie, produced and engineer "I Love Marijuana" at Perry Vale Studios.