“The Sabbath That Assassinated Atheism” from Christian Faith Publishing author Herman Cummings is a powerfully written collection of the author’s reflections on prophetic writings. 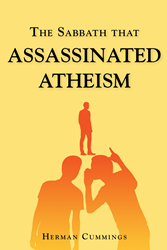 Cummings shares, “Just how, and when, did all existence begin? According to the book of Genesis, the Moon and the rest of the universe were created three days after our Earth. So, that makes the universe about 5 billion Earth years old. We explain why we can’t use light rays from distant galaxies as a gauge.

“How did we get our Moon? Since the Moon wasn’t captured, nor was it debris that convalesced into a perfect sphere, what force or intelligence placed the hollow Moon in a uniquely circular orbit?

“How old is God (Yehovah)? Since He goes back to infinity, what was He doing to occupy Himself before He decided to create our universe? What is the origin of sin and Satan? Why did Lucifer turn evil, and when? Lucifer could not have recruited angels in Heaven to side with him, right under Yehovah’s nose. So where did those rebel angels come from? Where are they now?

“This book takes you on a journey, starting with infinity, and ending with eternity. Using the seven feasts given to the House of Jacob, we’ll explain the seven days (weeks) shown to Moses, how the feasts were first enacted, and how each feast will have been fulfilled by Yeshua.

“By the time that the Day of Trumpets in AD 2022 occurs, the belief system of Atheism will have been assassinated.”

Published by Christian Faith Publishing, Herman Cummings’s new book is an engaging discussion of biblical prophecies and the author’s experiences with restricted research.

Cummings presents a thought-provoking discussion of prophetic writings, modern fallacies, and the projected date for the appearance of the two witnesses in Jerusalem within this uniquely crafted work. He shares in hopes of encouraging others to take steps towards reconnecting with God.

View a synopsis of “The Sabbath That Assassinated Atheism” on YouTube.

Consumers can purchase “The Sabbath That Assassinated Atheism” at traditional brick & mortar bookstores, or online at Amazon.com, Apple iTunes store, or Barnes and Noble.

For additional information or inquiries about “The Sabbath That Assassinated Atheism,” contact the Christian Faith Publishing media department at 866-554-0919.