The award-winning documentary, Heroin's Grip is educating people about the opioid crisis and provides a unique perspective on the issue that impacts thousands of American families. 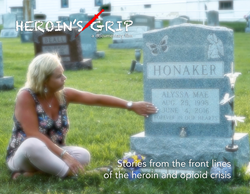 Shannon mourns the loss of her 17 year old daughter.

“The film is changing attitudes about addiction. It changed mine; I used to say ‘It’s not my problem.'"

ConjoStudios, LLC announced today that the powerful documentary film, Heroin’s Grip - Stories from the front lines of the opioid crisis, recently released on Prime Video, is changing attitudes about addiction. One viewer wrote: "This movie will change your life. You will never look at addiction the same. Everyone should see this!”

“It changed my attitude,” says Maryland filmmaker and director of Heroin's Grip, Conrad Weaver, “I used to say ‘It’s not my problem.’ But after working on the film, that has changed, and my goal is now to help people understand that the opioid crisis is ‘our problem’ and we all have a responsibility to help solve it.”

Weaver hopes that releasing it on Prime Video will help reach a wider audience who may not completely understand the impact addiction has on individuals, families, and communities. “The film shows the complete story. People who have watched it say they now have a much better understanding of the problem and their responsibility to their friends and neighbors caught in addiction’s grip.”

The highly anticipated national release of the award-winning film caps a year of screenings in select theaters and at special events, including a recent screening on Capitol Hill for members of Congress hosted by Maryland Congressmen, Jamie Raskin and David Trone. “Heroin’s Grip presents the unvarnished truth, humanizing this epidemic through the real stories of our family, friends, and neighbors.” - Rep. David Trone.

A number of nationally-recognized leaders in the addiction and recovery community have endorsed the film, including John Shinholser, President of the McShinn Foundation who says the film is, “The best current film about opiate addiction and the family/community impact."

Ryan Hampton, national advocate & author of “American Fix: Inside the Opioid Addiction Crisis—and How to End It” says, “Heroin's Grip does a great job of helping the viewer better understand addiction and its consequences, and it shows that recovery is possible when a community comes together to reduce stigma and provide resources for those caught in addiction's grip."

Heroin’s Grip is available to rent or buy on Prime Video in the United States and in the United Kingdom and will soon be available world-wide on other platforms. Weaver plans on donating a portion of the profits the film generates to organizations helping people get into recovery programs.

To view the film and the trailer, visit: https://www.amazon.com/v/conjostudios

For more information about Heroin’s Grip or to order the film on DVD or Blu Ray, please visit http://www.heroinsgrip.com
###

Shannon mourns the loss of her 17 year old daughter, Alyssa.Shannon's story is featured in the film, Heroin's Grip.

Screengrab from the film: Heroin is cooked and prepared for injection.Heroin's Grip is changing attitudes about addiction.

Shannon mourns the loss of her 17 year old daughter, Alyssa.Shannon's story is featured in Heroin's Grip.