Kevin Goodman, a Democratic candidate for Indiana state representative, has adopted the Blue Dog platform at the state level and encourages more state and local level moderates within the party to do the same. He argues that partisan politics now threatens the credibility of the Nation, at home and abroad, and that responsible politicians will seek to narrow the divide rather than exploit it. 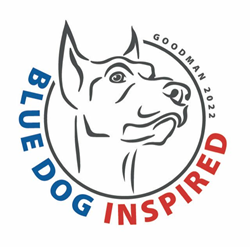 If you want to extinguish the opposition and hold your party as the sole legitimate answer then that is contrary to our constitutional beginnings and its underlying philosophy.

Kevin Goodman, a Democratic candidate for state representative in Indiana, has adopted a stylized image of a Doberman for his campaign logo. He is a Doberman owner actively working towards certifying one of his dogs as a search and rescue K9 but he styled his logo as a tribute to the Blue Dog Congressional Caucus. As a state candidate, Kevin is not eligible to join the congressional caucus but he has adopted their philosophy.

Kevin is running in a district that leans heavily Republican. Over the last decade the Democratic candidate typically pulls about 30% of the vote and the Party often fails to attract candidates for local office. Kevin is nevertheless hopeful. While the district is mostly rural, he worked for over six years as a child protection specialist in the district’s most populated county. In that capacity he worked closely with local law enforcement, the prosecutor’s office, probation and the courts. Kevin says the local establishment knows he’s principled and a hard worker.

Kevin identifies as a moderate and he strongly opposes partisan sentiments. He argues that a multi-party platform emerged as a checks and balances and is as old as the founding of the nation (citing the Federalists and Anti-Federalists). He points out that every dictatorship of the twentieth century began on a party platform with an aim toward extinguishing all other parties. To that end Kevin insists that “party loyalty is not patriotism.” Kevin says “If you want to extinguish the opposition and hold your party as the sole legitimate answer then that is contrary to our constitutional beginnings and its underlying philosophy.”

When Kevin did a deep dive into the Blue Dog Coalition’s message, it really resonated with him. The caucus takes a moderate stance on most issues and seeks to work towards bi-partisan solutions. One of the caucus’ primary positions is service to the constituency and independence from Party leadership. Members have on occasion even refused to pay Party dues. Kevin says this particularly appeals to him because he believes an elected official should serve the constituency first and foremost. Kevin says that the Blue Dogs demonstrate that you can identify with a party but keep your independence.

Kevin believes the United States is at a crux where partisanship has hurt the US’s position of leadership in the world and is threatening to undermine the perceived legitimacy of government within its own borders. Kevin blames the widening divide between left and right politics and the fact that the extremes are too often taking center stage in both parties. He advocates for a return of moderates on both sides of the aisle so there can be dialogue, discussion and collaboration.

Kevin acknowledges he’s faced a lukewarm reception with some members of his local Party and that his message of moderation fails to galvanize the partisan core but he’s hopeful he'll carry a much wider vote in the general election than a strongly partisan candidate could reasonably hope for. Kevin says that the Democratic Party should encourage more candidates like him because that is their only chance of winning districts like his. He hopes to encourage more State and local office candidates to adopt the Blue Dog philosophy of service to the constituency and independence from party leadership and to encourage such candidates to see partisanship as something to overcome and neutralize rather than nourish. For Kevin, this is a matter of principal.