With its high-altitude vineyards and limestone soils, this large Spanish PDO has recently been able to turn the limits of its marginal geographic position into a plus. Terra Alta DO is represented by the “European Quality Wines: Taste the Difference” project. 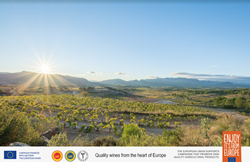 The most southerly DO wine area in the region of Catalonia, Terra Alta is nestled among the mountains, approximately 60 miles south of Tarragona. As mentioned in the name itself, which translates into High Land, Terra Alta has always been forced to face the limits of mountain regions: difficult and rare communication and trade exchanges, as well as limited mechanization and development of secondary and tertiary sectors. This has inevitably shaped the local wine production whose origins date back to Roman times and whose expansion was hampered by the lack of effective trade routes.

In recent years, this background has proven to be a winning combination. Old vineyards, native varieties such as Garnacha Blanca and Morenillo, and small family businesses - along with some coops that have played an important social role during the most difficult years - have secured attention from wine lovers looking for quality, stories and sustainability. Sustainable practices in the vineyards are possible thanks to the hilly terrain and El Cierzo, a local dry wind originating in the Ebro River valley that moderates temperatures during the growing season and prevents mildew disease on the vines. Finally, limestone soils help retain the acidity in white wines and provide red wines with a delicate profile.

All this has led to a renaissance of the region in the last decade, resulting in modern Mediterranean style wines. Terra Alta is now the fastest growing PDO (Protected Designation of Origin) in the region of Catalonia, ranking third as far as consumer preferences among the wines of the Catalan PDO based on a Nielsen study. Fresh and aromatic whites are based mainly on Garnacha Blanca which represents the soul of DO Terra Alta: nowadays, 33% of the world's White Garnacha is grown in the Terra Alta, a percentage that represents 75% of this grape’s production in Spain. Delicate and fruity reds are produced from Garnacha, Carignan, Tempranillo and Morenillo.

Terra Alta, which gained Picasso’s attention for its imponent landscapes, is now a UNESCO Biosphere Reserve. Its cultural heritage is also noteworthy, with two wineries that are part of the so-called wine cathedrals, two modernist jewels located in Pinell de Brai (1918) and Gandesa (1919).

About TASTE THE DIFFERENCE PROGRAM
The program: European quality wines: taste the difference is a project financed by the European Union and managed by Unione Italiana Vini and PRODECA for the promotion of PDO and PGI European wines abroad in China and the US. In order to achieve this objective, the TTD.EU program will organize wine seminars, workshops and b2b meetings both in these countries and in Spain and Italy, inviting wine professionals to join study trips to Europe. The program, realized in the span of three years (2021-2023) aims at creating awareness about European quality wines, in particular Italian and Spanish, which share a long tradition and a high standard of quality.

The beneficiaries: Unione Italiana Vini is the oldest and most commissioned Association of the Italian wine market. It represents cooperative, private and agricultural wine-companies, bottlers, consortia, associations and wine-making machines or wine cellars / laboratory manufacturers, located throughout the Italian territory. Promotora de Exportaciones Catalanas (PRODECA) is a public company established in 1986 and added to the Department of Agriculture, Livestock, Fisheries and Food of the Government of the "Generalitat de Catalunya."