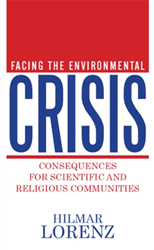 “Global climate talks lurched to an end here Sunday with finger-pointing, accusations of failure and fresh doubts about the world's collective resolve to slow the warming of the planet — at a moment when scientists say time is running out for people to avert steadily worsening climate disasters.” This is according to a news article posted by washingtonpost.com about the 2019 U.N. Climate Change Conference held in Madrid, Spain.

In “Facing the Environmental Crisis: Consequences for Scientific and Religious Communities” (published by Xlibris in November 2015), Hilmar Lorenz argues how societal communities bearing a particular responsibility for the environmental crisis, draw consequences from it by acting their ways where governments do not act. He considers these as the scientific communities since they have produced theories that are beyond their technologically successful industrial applications and have shown side effects endangering all life on earth. Then there are also the religious communities because of the declarations of their leaders who, according to Lorenz, merely talk about preserving God’s creation from human destruction but do not act accordingly besides going green in their own properties.

“There is a growing unrest in Western countries in particular, because more and more people doubt that the development of this scientific technological world furthermore brings serious progress for them. Consequently, more and more of them fall for populist politicians who know to say what they want to hear without having any solutions to the crisis. Instead, they deny its existence and restrict themselves to blame those for undermining their livelihood who try to face the crisis,” Lorenz says. “It is by addressing the problem of facing the environmental crisis that this book may appeal to those who try to understand what is going on today and to take a stand in this.”

“Facing the Environmental Crisis: Consequences for Scientific and Religious Communities” aims for readers to get an overview of the growing environmental crisis happening today despite its complexity and how the entire scientific and religious communities must face the environmental crisis and draw consequences from it for the role that their members should play so that others may follow their examples. For more details about the book, please visit https://www.xlibris.com/en/bookstore/bookdetails/727356-facing-the-environmental-crisis.

About the Author
Hilmar Lorenz was born in Germany in 1940 during the Second World War. In 1960, he got his baccalaureate from a Humboldian so called “Humanistic Gymnasium” (a secondary school). He studied Protestant Theology in Hamburg. His career as a Lutheran parish pastor ended in 1981 when his first wife together with his, then, 13 years old son moved out of the parsonage in which they lived. After his sabbatical in which he had studied Gestalt psychotherapy in Esalen Institute, Big Sur, California, he reconciled with his first wife. In 1984, he became a prison chaplain and civil servant of North-Rhine Westphalia State in Germany. Unfortunately, the reconciliation did not last. He divorced and, in 1989, married a second time. Since then, he lived close to Ottawa, Canada, for about 25 years with his second wife until her death in 2018, which caused him to return to Germany. He is now writing a book titled “Kant’s distinction between theoretical and practical cognitions. Methodological consequences.”

Xlibris Publishing, an Author Solutions, LLC imprint, is a self-publishing services provider created in 1997 by authors, for authors. By focusing on the needs of creative writers and artists and adopting the latest print-on-demand publishing technology and strategies, we provide expert publishing services with direct and personal access to quality publication in hardcover, trade paperback, custom leather-bound and full-color formats. To date, Xlibris has helped to publish more than 60,000 titles. For more information, visit xlibris.com or call 1-888-795-4274 to receive a free publishing guide.