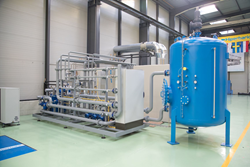 “We are excited that this announcement coincides with our 20th anniversary celebration of Hiperbaric as a leader in innovation,” said Andres Hernando, CEO, Hiperbaric. “We look forward to the success of this new line of business for the company.”

Hiperbaric, the world leader in high pressure processing (HPP) equipment for the food industry, announced the expansion of its facilities for industrial equipment used in post-processing metal parts.

The announcement was made at the company’s 20th anniversary celebration at its world headquarters in Burgos, Spain, on Wed., Nov. 6.

“We are excited that this announcement coincides with our 20th anniversary celebration of Hiperbaric as a leader in innovation,” said Andres Hernando, CEO, Hiperbaric. “We look forward to the success of this new line of business for the company.”

With the expansion, Hiperbaric increased its manufacturing facilities to 30,000 square feet and from one to three buildings – all devoted to machining, assembly and design. The expansion includes space for future production.

The new business line includes production of machines that post-process metal parts made by additive manufacturing (3D printing). This technology, known as HIP (Hot Isostatic Pressing) applies high pressure and high temperature to metals, increasing their durability and design flexibility, and providing savings on raw materials and processing time. The application may also be used in other sectors, including prosthetic medicine.

Hiperbaric invests more than 10% of its net profit in R&D and more than 20% of its staff is directly or indirectly involved in R&D projects.

“Hiperbaric’s R&D dedication has allowed the company to become the world leader in HPP for the food industry,” said Hernando. “Now, we’re on track to become the leader of high pressure technology, regardless of the industry or application.”

Hiperbaric was formed in 1999, when Andrés Hernando, CEO of Hiperbaric, discovered the use of high pressure to extend the shelf life of food as well as improve food safety. This non-thermal food processing method keeps the organoleptic characteristics and nutritional value of fresh food. HPP applies to a wide variety of products, from juices and drinks to avocado products, meat, seafood, ready-to-eat meals, plant-based dips, baby food and pet food. HPP meets the increasing demand for natural and healthy, ready-to-eat foods without additives or preservatives.

Among Hiperbaric’s milestones include developing the world’s first horizontal HPP machine. Hiperbaric was recognized internationally several times. In 2008, the company received the IFT Innovation Award for the development of the largest-capacity HPP machine. In 2015, Hiperbaric received the Edison Award for its contribution to innovation and technological advances. Currently, the company maintains its global leadership position as a supplier of high pressure processing equipment.

The Nov. 6 event included more than 500 attendees, including employees, suppliers, customers and local and regional officials.

Keynote speaker was Toni Nadal, former coach and uncle of tennis star Rafa Nadal, whose presentation focused on motivation, self-improvement, talent and personal development. The event concluded with a tour of Hiperbaric’s facilities.

Hiperbaric is the world's leading provider of high pressure processing (HPP) equipment for the food industry. Since its inception in 1999, Hiperbaric has designed, developed, manufactured and sold worldwide its HPP equipment. The company is recognized for its reliability, customer support, teamwork and continuous efforts in R&D.

Hundreds of companies worldwide use Hiperbaric equipment for the processing of juices and beverages, meat, fish, seafood, fruits, vegetables, dairy and ready-to-eat meals. HPP is a highly versatile technology which can be applied to a wide range of foods.