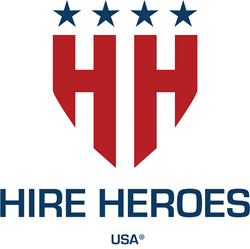 In an announcement timed to coincide with the upcoming Veterans Day holiday on November 11, Hire Heroes USA today stressed that veteran unemployment and underemployment remain key issues in the United States, despite low national unemployment rates.

Today, the national nonprofit launched its 11 Reasons fundraising and awareness campaign that highlights just some of the thousands of stories shared by the men and women who seek its free employment services each year. Campaign donations will support Hire Heroes USA’s mission to empower transitioning military members, veterans and military spouses to succeed in the civilian workforce.

“On Veterans Day, we honor and recognize everyone who has taken the oath to protect and defend this country, by serving in the U.S. Armed Forces,” said Hire Heroes USA CEO Christopher Plamp, a retired Air Force combat pilot. “Once these men and women leave the service, it’s up to us, as Americans, to ensure that they can provide for themselves and their families. Securing a job in the civilian workforce is the first step.”

The nonprofit will host a series of events and initiatives between now and November 12, when Veterans Day will be observed as a federal holiday:

Hire Heroes USA, which is now in its 11th year, provides free employment services to transitioning military, veterans and military spouses across the United States and around the world. Those services include resume, networking and interview assistance, online workshops and training modules, job matching, and a job board that averages 15,000 listings each month.

About Hire Heroes USA:
Hire Heroes USA is the leading veteran service organization specifically targeting the issues of underemployment and unemployment among veterans. Hire Heroes USA has earned Charity Navigator’s highest possible 4-star rating for a third consecutive year and it also has a GuideStar Platinum Seal of Transparency. Funding for the nonprofit’s services is exclusively through private grants and public donations. For more information about our mission, services and how to get involved as a corporate partner, employment partner, donor or volunteer, visit hireheroesusa.org and follow us on Facebook, Twitter, LinkedIn, and Instagram.