Hiring Spree Continues in 2019; No Signs of Recession on the Horizon

An Express Employment Professionals' survey reveals 94% of businesses don't plan to eliminate any positions in the second quarter, indicating a continuing hiring spree. 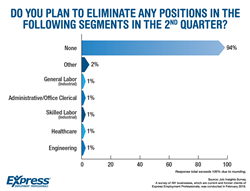 “After such a long stretch of job growth, it’s natural that fears of an inevitable recession would emerge,” said Bill Stoller, CEO of Express. “But reports indicate we have a strong job market, a strong business environment and a positive outlook for the year.”

In yet another sign that a 2019 recession is unlikely, the vast majority of businesses in a recent Express Employment Professionals survey reported that they have no plans to cut their workforces.

In the survey from Express, respondents were asked whether they planned to eliminate any positions during the second quarter of 2019. Ninety-four percent said they had no such plans.

Express franchise owners report that the survey is consistent with what they are seeing in communities across the country.

“Unemployment is so low, and there is a war for talent,” says Janis Petrini, an Express franchise owner in Grand Rapids, Michigan. “There is no prediction of any recession in 2019,” she reported, noting that any slowdown will actually be due to a work shortage. “The growth will slow not due to sales but due to a lack of available talent.”

Chris Ashcraft, an Express franchise owner, from Mobile, Alabama, says that hiring “has been picking up” since last year, while Terri Greeno, an Express franchise owner in Crystal Lake, Illinois, confirms that “there are still more open jobs than qualified applicants.” Greeno does note, though, that some companies “appear to be a little more apprehensive than at this time a year ago.”

With that apprehension in mind, Reid Bates, an Express franchise owner in Olympia, Centralia and Aberdeen, Washington, warns that the most likely cause of a slowdown may simply be fear of a slowdown.

“People are hearing of a slowdown looming, and that may lead to some self-fulfillment as they don’t want to be too slow to react when the slowdown occurs,” he said.

“After such a long stretch of job growth, it’s natural that fears of an inevitable recession would emerge,” said Bill Stoller, the CEO of Express. “But reports indicate we have a strong job market, a strong business environment and a positive outlook for the year.”

The survey of 491 businesses, which are current and former clients of Express Employment Professionals, was conducted in February 2019 to gauge respondents' expectations for the second quarter of 2019.