Phillip B Gottfredson shares a Timpanogos perspective in ‘My Journey to Understand ... Black Hawk’s Mission of Peace’ 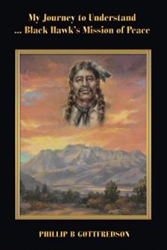 Phillip B. Gottfredson shares an intimate perspective of the Timpanogos peoples of Utah and the Black Hawk War of 1849 to 1873 in his debut Native American history book titled “My Journey to Understand ... Black Hawk’s Mission of Peace” (published by Archway Publishing).

Some 70,000 Timpanogos Indians — the aboriginal people of Utah — died from violence, starvation, and disease after Mormon colonists stole their land and destroyed their culture over a 21-year timeframe according to the detailed account Gottfredson learned from the Native Americans. Because few people know anything about Timpanogos Indians, who they are, or what they believed in, the author seeks to educate readers about them.

“Native American history is an integral part of this country’s history,” Gottfredson says. “After all is said and done, after the Black Hawk War and all the suffering it caused, I make this one conclusion: It isn’t about the war. It isn’t about religion. It isn’t about owning land and having material wealth. It’s not about power. In the end, it’s about the human condition. There is no such thing as race. Race is man’s invention to create divisions and separations, the building of walls and fences to segregate us from one another, to have power over each other. There is but one race, the human race. It’s about humanity, human equality, aboriginal rights and a sovereign people. It’s about there being one world, one prayer, and one heart. Having compassion toward all our relations.”

“My Journey to Understand ... Black Hawk’s Mission of Peace” is also available for purchase on Amazon at: https://www.amazon.com/Journey-Understand-Black-Hawks-Mission-ebook/dp/B0844KNW1R.

About the Author
As a historian Phillip B Gottfredson has spent the past 20 years researching and writing about the Black Hawk War in Utah while living with various Indian tribes throughout North and South America. He was invited to participate in numerous sacred ceremonies and received council from many tribal elders and leaders, which is unusual among today’s historians. Because Gottfredson is personally involved in Native American culture, his account brings an alternate perspective to a war that has historically been examined from the perspective of Mormon colonizers. For his advocacy for the First Nations people of Utah, the Utah State Division of Indian Affairs awarded him the prestigious Indigenous Day Award.

Simon & Schuster, a company with nearly ninety years of publishing experience, has teamed up with Author Solutions, LLC, the worldwide leader in self-publishing, to create Archway Publishing. With unique resources to support books of all kind, Archway Publishing offers a specialized approach to help every author reach his or her desired audience. For more information, visit http://www.archwaypublishing.com or call 888-242-5904.