The Taylor Aerocar, only FAA-certificated and roadable flying car, is coming up for auction on Sat., Jan. 18. 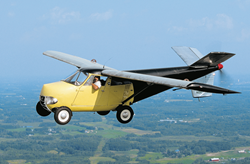 Take a Drive in the Clouds

“The Taylor Aerocar is the only FAA-certificated, roadable flying car. It's an all-original historic artifact to appreciate and enjoy," said Greg Herrick, Aerocar owner.

It’s the stuff of fantasy: a real flying car. Except, it’s not. Since the 1950s, five FAA-certificated Taylor Aerocars have taken to the sky and roads. Now, for the first time in nearly two decades, the star of the fleet which is still both air and roadworthy the 1954 Taylor Aerocar N-101D, is coming up for auction at Barrett-Jackson in Scottsdale.

“This is the one you read about as a kid in Popular Mechanics magazine,” said Greg Herrick, vintage airplane collector and current owner of the Taylor Aerocar. “Whether you are an aficionado of transportation milestones, engineering genius or simply appreciate owning extraordinary rare examples of automotive – and aviation – progress, this Taylor Aerocar is an all-original historic artifact to appreciate and enjoy.”

Take a Drive in the Clouds
The Aerocar features side-by-side seating for two. Advanced for its time, most of the fuselage skin is made of composite material and the car is front wheel drive. It is powered by a Lycoming O-320 engine with the propeller mounted at the end of a long tail cone. In flight, the wings are high and unobtrusive. Its cruise speed is about 100 mph. Takeoff speed is 55 mph and the airplane is controlled by the same steering wheel as is used for driving.

When used as an automobile, the Aerocar’s wings fold back and can be towed behind the car. In about 10 minutes, the wings can be folded back into place and the car again becomes an airplane. With 15,254 miles and 781 flight hours, this Taylor Aerocar is an incredible artifact of transportation history.

When Anything Seemed Possible
The Taylor Aerocar is a testament American ingenuity during the post-war era when anything seemed possible, even flying cars. It was developed by aeronautical engineer Moulton (Molt) Taylor, an inventor at heart. Among his many endeavors, he explored plans for an Army flying jeep, the “Fleep,” and for a 17-passenger “Aerobus.”

EDITOR’S NOTE: Greg Herrick, owner of the Aerocar, is available for interviews. Rights-free photos are available editorial use at http://bit.ly/AerocarPhotos.