Steeped in Civil War history and seen in the movie 'The Prince of Tides,' one of the most important antebellum mansions in South Carolina is for sale and featured this week at TopTenRealEstateDeals.com. 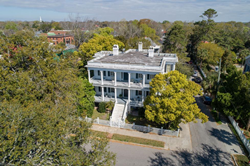 This 1852 mansion in South Carolina was chosen by Barbara Streisand for 'The Prince of Tides' movie she directed and starred – now for sale at $2.395 million.

Steeped in Civil War history and straight out of a southern romance novel, one of the most important antebellum mansions in South Carolina, built in 1852 and overlooking the Beaufort River has come on the market. The home served as a hospital for Union Army officers and headquarters to General Rufus Saxton during the Civil War. Elegantly restored, it has been used as the Bay Street Inn, currently as a family home, and in the movie 'The Prince of Tides.' It is now for sale, priced at $2.395 million.

To escape the summer heat of his South Carolina cotton plantation on Dataw Island where he also grew oranges and indigo, Lewis Reeve Sams purchased land on the Beaufort River and built the three-story mansion in 1852 as a retreat for his family where they would be more comfortable with the cooling breezes off the water. The features of the house are classic, deep-south antebellum designed to catch the breeze with its upper and lower-story front porches that span the width of the house with views over the water and the back porch overlooking the deep green of the landscape and the formal layout of the boxwood garden maze. Rooms are generous and speak of earlier times when a party would converse in the main living room, go in to dinner and afterwards the men would gather in the library with their port and the ladies would retire to the parlor. Windows were tall and deep, welcoming in the evening breeze. At 7,600 square feet, included in the three-story home are six bedrooms, seven bathrooms, large entry foyer with dramatic staircase, formal living and dining rooms, a library-media room, parlor, family room and large eat-in kitchen. There are eight fireplaces, hardwood floors and the home has original elaborate millwork throughout along with built-in cabinets and bookshelves. Modern updates include an elevator, two laundries, and the ground floor has two bedrooms, a catering kitchen and could be closed off as a separate apartment.

Now on the market is the home that was chosen by location scouts as a set for the 1991 film 'The Prince of Tides' starring Nick Nolte and Barbara Streisand which was nominated for seven Academy Awards. The movie was based on the novel by Beaufort-native Pat Conroy. A classic example of an Old South antebellum mansion and gardens but with comfortable 21st-century amenities, it is now for sale, priced at $2.395 million. The home is listed by Leah Melvin, Keller Williams Realty in Beaufort, South Carolina.