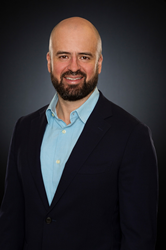 Andres Chacon, deputy project manager for aviation at HNTB Corporation, has been named as a “Top 40 Under 40” award recipient by Airport Business magazine.

He is a talented and passionate architect specializing in the modernization, expansion and transformation of some of the world’s busiest airports.

Andres Chacon, deputy project manager for aviation at HNTB Corporation, has been named as a “Top 40 Under 40” award recipient by Airport Business magazine. The annual award recognizes 40 aviation industry professionals under the age of 40 for their academic, professional and community achievements.

“We congratulate Andres on being named to this prestigious group of top aviation industry professionals by Airport Business magazine,” said Yvonne Bilshausen, HNTB West Division aviation leader and national aviation architecture principal. “He is a talented and passionate architect specializing in the modernization, expansion and transformation of some of the world’s busiest airports. Andres delivers creativity, innovation and significant return on investment to our aviation clients.”

Chacon graduated from Universidad de San Buenaventura, in Cali, Colombia, and joined HNTB as a deputy project manager in 2018. He has been the deputy project manager for the $350 million Tampa International Airport main terminal project, including curbside expansion, central utility plant, automated people mover station, and maintenance and police office building projects. At Hartsfield-Jackson Atlanta International Airport, Chacon’s work included the design development of five domestic airline gates to Terminal North, and was part of the design team for a 500-seat Sky Club for Delta Airlines in Terminal B.

Airport Business magazine is the most widely circulated and audited business publication that targets professionals who manage airports, airport-based businesses and corporate flight facilities in North America. Its more than 17,000 subscribers are critical to the safe operation of the North American air transportation system.

“The 2019 Top 40 Under 40 are another crop of incredible young leaders cementing a strong future for the aviation industry in North America,” said Joe Petrie, Editor-in-Chief of Airport Business magazine. “This group of young professionals have displayed assertiveness, drive and amazing innovation in the field. They’ve demonstrated knowledge and excellence in the field that highlights their dedication to building and enhancing the backbone of our economy.”

This is the eighth year of the Top 40 program. Many past honorees are now leading major institutions and projects of the aviation industry due to their dedication and recognition for their valuable skills.

About HNTB
HNTB Corporation is an employee-owned infrastructure firm serving public and private owners and contractors. With more than a century of service in the United States, HNTB understands the life cycle of infrastructure and addresses clients’ most complex technical, financial and operational challenges. Professionals nationwide deliver a full range of infrastructure-related services, including award-winning planning, design, program management and construction management. For more information, visit http://www.hntb.com.