In exclusive interviews with top artists, executives and leaders from the urbano Latino music scene, this digital cover presents the evolution of a genre that was born in the streets and is currently a massive worldwide phenomenon 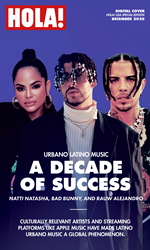 The digital cover presents the unfolding story of urbano Latino music, exhibiting the past ten years of history and achievements.

“The digital cover presents the unfolding story of urbano Latino music, exhibiting the past ten years of history and achievements. It also emphasizes the diversity of some of the most important and influential artists from the urbano Latino scene, as well as thought leaders, and executives from the music industry,” said Nagidmy Marquez, Executive Editorial Director of HOLA! USA.

“When we analyze the past ten years of the entertainment industry, and consider the contributions made by Latino artists, the urban music movement continues to have global implications. From 2010 to 2020, a new generation of the urbano movement came to fruition by blending with the already established artists. The outcome: a genre that became a landmark in commercial music with unprecedented results,” Nagidmy commented.

Finally, “Urbano Latino music fans are made up of a variety of Latino generations, who not only enjoy their favorite artists’ music, but also follow them on social media, and engage with their content on various mobile and streaming platforms. This digital cover is for them. We wanted to bring urbano Latino music fans an exclusive conversation with Bad Bunny, Natti Natasha and Rauw Alejandro that provides them with an in depth understanding about the urbano movement, and their personal and global successes,” Nagidmy concluded.

About Us
HOLA! USA is a top U.S. Latino publication covering celebrities, entertainment, fashion, beauty, recipes, lifestyle and the world’s royal families. HOLA! USA is part of the ¡HOLA! & HELLO! global media powerhouse founded in 1944, which publishes 26 international editions in 10 languages throughout 120 countries. HOLA! USA is the number one Hispanic entertainment site in the U.S. (non-network) and together with its sister brand HELLO! US, one of the top 30 lifestyle publishers in the U.S.