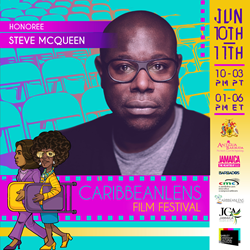 There’s nothing you have seen or done which someone else somewhere else in the world cannot relate to because we’re human beings. - Steve McQueen

In celebration of Caribbean-American Heritage month, the Government of Barbados in association with the Caribbean Heritage Organization and the Shirley Chisholm Cultural Institute are pleased to present the 2021 CaribbeanLens™International Virtual Film Festival -Where Hollywood Celebrates the Caribbean™ on Thursday, June 10 and Friday, June 11 10am – 3pm PT/1:00pm – 6:00pm ET.

There will be a one on one conversation with award-winning “Small Axe” Director Steve McQueen and Screenwriter, Director and Educator from Manchester, Jamaica, Natasha Griffiths.

Due to COVID-19 postponement, films have been selected from 2020 submissions. Winners will be announced on the last day of the festival, Friday, June 11, at approximately 2:30 PST.

The logo of Ms. Chisholm stepping out with a folding chair under her arm and VP Harris in step behind her was done by visual artist David Heredia. The “Bring A Folding Chair” campaign is to add to the many social justice mantras of this age and in support of Representative Yvette Clarke’s H.R. 2198 and Senator Raphael Warnock’s S. 1032 Bills to the Joint Congressional Committee on Libraries to have a statute of the 5’2” towering in the US Capitol.

A video presented by the Shirley Chisholm Cultural Institute on Congresswoman Shirley Chisholm's run for the President of the United States produced by B-Bullard LLC and The Mozzlestead Company with the voice over of Award-Winning Actress Anika Noni Rose will be screened during the festival.

About CaribbeanLens™ International Film Festival
The CaribbeanLens™ International Film Festival is where Hollywood celebrates the Caribbean. Invitees to the festival include executives from the major Hollywood studios and production companies. The purpose of the festival is to celebrate the blending of the Caribbean and the diaspora cultures and talent to create unique and outstanding work and to raise global awareness of the new renaissance of film-making and music production that the Caribbean basin is currently experiencing. The festival also aims to celebrate all filmmakers and welcomes a limited amount of submissions from our international friends.