In an era of shrinking budgets and growing need for exposure, a professional-level training video by Maury Rogow, CEO of Rip Media Group, offers businesses a do-it-yourself approach to the crucial first steps in video ad creation. Master class shows participants how to craft their story and sell it. 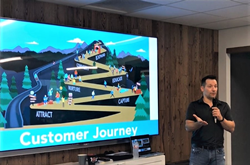 Including a video on your landing page can boost your conversion rate by up to 80%.

By putting the power in people’s hands we hope to disrupt the industry in such a way that would allow the small businessperson, the small startup with a limited operational budget, to achieve the video marketing they need to be a success.

According to recent data from the Internet Advertising Bureau, the average spend per advertiser on the most effective type of video advertising—professionally produced short-form story-based content—is down 27% from 2019, primarily due to the effects of the COVID-19 pandemic.(1) Meanwhile, the Small Business Administration estimates that some 600,000 new businesses will launch during the course of this year.(2) “As ad budgets and competition increases,” says filmmaker and advertising entrepreneur Maury Rogow, “it becomes more important for companies, especially small ones, to get their message out. At the same time, pressure on ad budgets makes it increasingly difficult to do that.”

To help alleviate some of that pressure, Rogow, who is CEO of Hollywood’s Rip Media Group, says his company has produced a master class designed to offer professional-level training in the pre-production phases of ad design and creation. By bringing this part of the process in-house, notes Rogow, an advertiser could experience significant savings. Typical rates for a professional writing and creative team run anywhere from $75 to $250 per hour;(3) at a midpoint $150 per hour, two weeks of pre-production development would run about $18,000.

“By putting the power in people’s hands we hope to disrupt the industry in such a way that would allow the small businessperson, the small startup with a limited operational budget, to achieve the video marketing they need to be a success. The video marketing industry is a $27-billion industry giant. We’re giving David the tools to battle Goliath,” Rogow said.

With more than 20 credits in his IMDb page, Rogow used his knowledge and skills as a Hollywood insider to craft a Master Class that covers the whole gamut of video marketing, from the story to the placement. Rogow adds that the pre-production phase itself is free of challenge. In fact, he says, it involves the central aspect of all advertising: telling the story of the product or service or organization being advertised. On the one hand, this is simple—Hollywood, he says, has been telling the same seven stories over and over for more than a hundred years;(5) just decide what you need people to know—and tell that epic story. On the other hand, as expert observers from Aristotle(6) to Robert McKee(7) have pointed out: To win the audience over, it is essential to put the right piece of the story in the right place at the right time, with the right emphasis.

“Stories have rules,” says Rogow. “Those rules are known, and they can be taught—that’s what we do in this course. Once you master the rules and apply them to the story you want to tell, you can go to an animator or a videographer and say, here’s my story. Here’s the storyboard and the script. Follow this. Do that. You’ve saved yourself thousands of dollars, and you’ve come up with the core of an ad you know will work.”

About Rip Media Group
Rip Media Group, founded in 2007, is a trailblazing video marketing company based in Los Angeles, California. Founded by digital pioneer Maury Rogow, Rip Media Group brings a unique combination of storytelling art and ROI strategy to the field of animation and live action video. Maury is a member of the Producers Guild of America, with several feature films to his credit. His unique background in film production led to an epiphany in the intrinsic value of storytelling in marketing, no matter how technical the subject. This led to his work in a high-tech firm and its purchase by Cisco for over $1Billion. He went on to form Rip Media Group, a collection of award-winning storytellers, technicians, and artists, selected from the Producers Guild, Writers Guild, and Screen Actors Guild. Their Green Light Production Process™ and other proprietary systems are used to create world-class voiceover, animation, and live action video to grow businesses of any size. https://ripmediagroup.com. For more information on the Master Class, visit lightscamerasales.com.