Kingwood, Texas, joined 70 other cities in 24 countries worldwide in a Day of Celebrating Israel and Jewish Life. The Holocaust Remembrance Association sponsored a March of Remembrance Global Day of Action to take a stand during the Biblical Feast of Tabernacles (Sukkot) for reconciliation, not hatred. This joyous feast was the perfect opportunity to join together as Jews and Gentiles in a public demonstration of unity and reconciliation. 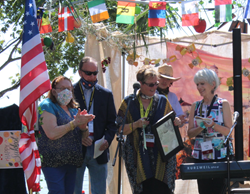 Times of crisis have always brought an onslaught of antisemitism and hatred of Jews. This pandemic also provides fertile ground for antisemetic conspiracy myths. As members of the global March of Life movement we want to use this feast as an occasion to bless Israel and Jewish life.

The message of the March of Remembrance is: reconciliation begins with me!

On Sunday, October 4, people of diverse backgrounds gathered at King’s Harbor, the Kingwood, Texas, location for the Holocaust Garden of Hope, to celebrate Reconciliation Not Hate. The crowd took a stand for Israel and Jewish Life by observing the biblical holiday of Sukkot, or Feast of Tabernacles. Sukkot (plural of Sukkah, or Tabernacles) were built and decorated (see accompanying pictures), and in the tradition of the holiday, participants found ways to “dwell” in those booths. One became the stage where music was performed and messages were proclaimed, another covered the registration table, and two more were the locations where children and adults participated in the Upstander Stones

The March of Remembrance/March of Life Global Day of Action: "Reconciliation, Not Hate" was conceived by the March of Life organization in Germany, and people in 70 cities worldwide gathered for the same purpose throughout the day. March of Life founder Jobst Bittner spoke from the event in Germany:

“We're experiencing one of the worst global disasters since World War II. The Covid 19 pandemic has so far claimed almost 1 million lives worldwide, and every death brings grief and suffering both for family members and friends. Hundreds of thousands of people are out to protest on the streets worldwide. Many of them oppose the Covid 19 restrictions in their countries, representing radically right-wing or left-wing positions. Others believe in conspiracy theories, and all too often, the protests are linked to outbreaks of hatred and violence. Times of crisis have always brought an onslaught of antisemitism and hatred of Jews, and this pandemic also provides fertile ground for antisemitic conspiracy myths. As members of the global March of Life movement, we want to use this feast as an occasion to bless Jewish life in our cities and countries and to visibly express our friendship with Israel.”

Celebration was the order of the day! Many were touched by the beautiful, meaningful dances performed by the Maria White Dancers and Vera Alkhatib. Dozens at a time joined in dancing to inspirational music in Hebrew and English, following leaders Ray and Patty Ehrenschaft in traditional Israeli dance steps. Scarves were utilized to safely distance the dancers, and they were also waved along with beautiful silken flags by the dancers, led by talented singers Sheena Doorn and Susan Debose Peitzman with daughters Lisa Barker and Keren DeBose. Chloe Sullivan delivered a dramatic reading, and puppets were brought to life to explain Sukkot.

Holocaust Garden of Hope founders and leaders, Mitch and Rozalie Jerome, Jeff Craig, Wendy Carreto and special guest and child Holocaust survivor Ruth Steinfeld shared their Holocaust stories, the history of the March of Remembrance, and the future of the Holocaust Garden of Hope, all interwoven like the ribbons that were later lifted up to fashion a giant 6-pointed Star of David. All learned why Jewish people “wave the Lulav” every day of Sukkot, and then everyone in attendance followed the biblical mandate to do so as a community and sang “Bind Us Together.”

The rocks that were painted for the Upstander Stones Project weren’t just for decoration but will be added to the planned 1.5 million stones being painted by individuals, schools, clubs, and nursing homes in the greater Houston area. Anyone can contact staff at the Holocaust Remembrance Association (HRA18) to pick up one or many sacks of 20 rocks, with paint, markers, and a list of 20 names of children murdered in the Holocaust who are being memorialized in this unique way. There will be designated locations in the Holocaust Garden of Hope where visitors can view the stones and begin to understand the tremendous number of innocent lives lost. According to Habakkuk 2:11 (CJB), "the very stones will cry out." May even the stones resound with cries of "Reconciliation, Not Hate!"

The organizers' clear statements were: “Reconciliation begins with me -- reconciliation begins with us as we gather together to send a message heard around the world. We will not stand by idly and allow hatred to divide our communities, local or global. We will join together, celebrating the humanity which makes us great, from the youngest child to our wisest elders.” This was a day to honor the past and give hope for the future.

Remembering the 1.5 million children who couldn't celebrate their own Jewish holiday

Black and White worshipping the Lord togetherReconciliation not Hate