The second from a series of themed exhibitions drawing on the talent of celebrated Blue Rain Gallery painters. Each Artist has been tasked with identifying and reinterpreting a masterwork by Joseph Henry Sharp (1859 - 1953). Each artist will draw on the strength of Sharp's original painting, while making the piece current and infusing it with their own unique style. 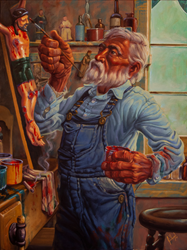 The Taos Society of Artists has captivated many art enthusiasts and collectors over the years. It created an allure that put Taos, New Mexico on the map, both nationally and internationally, as an important art destination.

Blue Rain Gallery is pleased to announce an upcoming group exhibition titled Taos Six Collection: An Homage to Joseph Henry Sharp. This show of new works is scheduled to take place April 30 – May 22, 2021 with an opening night reception on Friday, April 30th from 5 – 7pm.

In this special themed exhibition, celebrated Blue Rain Gallery artists paint tribute to the famed founding member of the notable Taos Society of Artists, Joseph Henry Sharp (1859 – 1953). Painters such as Dennis Ziemienski, Brad Overton, Matthew Sievers, Erin Currier, Deladier Almeida and Rimi Yang—to name just a few—will each select an original composition painted by Joseph Henry Sharp during his career, and they will pay tribute to the masterwork through their own adaptation and reinterpretation of the original composition.

Joseph Henry Sharp established a foundation and high bar of excellence in New Mexico with his western narrative paintings/ethnological portraiture. Sharp was best known for his portraits of Native peoples, most commonly depicting both Taos Pueblo Indians and Plains Indians. He was fascinated with the cultures he portrayed, regularly depicting his subjects with humanity. Sharp also painted landscapes and still lifes during his career. He was a dedicated artist, always chasing opportunities, and never seemed to turn down an exhibition—no matter how ambitious it may have been. In 1904 he launched an exhibition of 100 paintings in Los Angeles. In 1915 he formed the Taos Society of Artists with fellow founding members Oscar E. Berninghaus, E. Irving Couse, W. Herbert Dunton, Ernest L. Blumenschein, and Bert Geer Phillips. The group disbanded in 1927, but during their twelve-year existence, they encouraged each other, challenged each other, and sought to find a national stage for the kind of western painting they had developed.

This exhibition is the second in a series of six scheduled theme exhibitions that cast a spotlight on the pioneering members of the Taos Society of Artists. We present Taos Six Collection: An Homage to Joseph Henry Sharp a year after the debut exhibition of Homage to Oscar E. Berninghaus. We look forward to scheduled future exhibitions that continue the Taos Six Collection theme: An Homage to E. Irving Couse in 2022, An Homage to W. Herbert Dunton in 2023, An Homage to Ernest L. Blumenschein in 2024, and An Homage to Bert Geer Phillips in 2025. The Taos Society of Artists has captivated many art enthusiasts and collectors over the years. It created an allure that put Taos, New Mexico on the map, both nationally and internationally, as an important art destination. As gallerists that have enjoyed the vitality of the art market in Northern New Mexico for nearly 28 years, we of course feel a certain reverence toward the legacy of the Taos founding painters.

Taos Six Collection: An Homage to Joseph Henry Sharp gives collectors and art enthusiasts alike an opportunity to simultaneously celebrate the past and present. Do not miss a chance to experience this exciting showing at Blue Rain Gallery!

Sean Diediker, Fireside (after Joseph Henry Sharp painting titled “Daylight Firelight”), oil on canvas, 30”h x 22.5”wPainter Sean Diediker seeks to capture the essence of firelight, particularly where the source is unseen, as was a common and admirable accomplishment by Joseph Henry Sharp in many of his original paintings.

Doug West, Untitled (painting of Joseph Henry Sharp and Taos Mountain), oil on canvas, 30"h x 24"wArtist Doug West has playfully inserted a portrait of Joseph Henry Sharp into a landscape that is clearly a fusion of highly modern and graphic portrayals of the Southwest landscape and a Plains tribal scene influenced by one of Sharp's masterworks.