Justice, betrayal, revenge and redemption are at the heart of Stephen L. Bruneau’s gripping debut 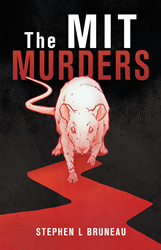 “It had so many twists and turns and kept me on the edge of my seat until the end."

Stephen L. Bruneau has made his authorial debut with “The MIT Murders,” a fast-paced, high-stakes crime thriller following Chief Homicide Detective Dimase Augustin as he races to find the man responsible for a series of violent homicides across the country, starting in Cambridge, Massachusetts.

MIT junior Susan Pierce is thrilled to have been selected to work as a lab assistant on an Alzheimer’s research project headed by the brilliant Dr. Hans Berger. After a major medical breakthrough, the research becomes backed by angel investors and subsequently launches a start-up biotech company. However, Pearce uncovers forged data and calls into question both the legitimacy of the project and the work of Berger. When she is ultimately forced out of the project, she devises a plan to have him removed from his position without compromising the research altogether.

Years later, Augustin oversees the investigations of a brutal string of murders, all superficially linked by strange, cryptic messages about truth and justice left at the scene. As he uncovers the victims’ deeper connection to one another, he discovers he is in pursuit of a cold-blooded serial killer who will do whatever it takes to see his revenge plan through.

“’The MIT Murders’ is a story about normal, everyday people like you or me who wake up one day to find that their friends are being killed off one by one and they have no idea why,” said Bruneau. “It’s a conflict about good versus evil, and how both qualities lurk just below the surface in all of us.”

“It had so many twists and turns and kept me on the edge of my seat until the end,” wrote Amazon reviewer Kristi Buresh.

“I really enjoy stories based in Boston and this is a good one,” wrote Amazon reviewer Daniel J. Galli. “Well paced with strong characters, ‘The MIT Murders’ was a joy.”

An exhilarating crime thriller about justice, revenge and moral equivalency, “The MIT Murders” challenges readers to think about the nuances of right and wrong, and whether the ends ever justify the means.

About the author
Stephen L. Bruneau is a financial services professional and entrepreneur. He is the founder and majority shareholder of Boston 128 Companies Inc., serving hundreds of corporate clients. Bruneau is a frequent industry speaker, active philanthropist and has won numerous industry and humanitarian awards. A graduate of Tufts University with two bachelor’s degrees in political science and psychology, he has been fortunate enough to travel the world but has lived in suburban Boston for most of his life. “The MIT Murders” is his first published novel. To learn more, please visit bruneaubooks.com.