HOPA Board President Begins Term by Sharing Gratitude and Goals 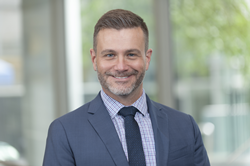 As Board President, Dr. Larry Buie hopes to expand HOPA’s reach and will oversee the launch of an Oral Chemotherapy Collective; Task Force for Student Engagement; and Diversity, Equity, and Inclusion Task Force.

As Board President, Dr. Buie hopes to expand HOPA’s reach by making inroads with pharmacy students, prioritizing patient advocacy, and focusing on diversity, equity and inclusion within the pharmacy profession and HOPA. His board presidency begins mid-way through HOPA’s 2020-2023 Strategic Plan.

In his inaugural address, Dr. Buie highlighted three particularly exciting new committees: an Oral Chemotherapy Collective; a Task Force for Student Engagement; and a Diversity, Equity and Inclusion Task Force. Also mentioned in his address were the many other HOPA committees, all of which are currently recruiting member volunteers.

In his incoming president’s address, Dr. Buie, who is also PGY2 Adult Oncology Residency Program Director at Memorial Sloan Kettering, said working with residents has played a role in his career success and satisfaction. Among other attributes, he cited residents’ commitment to health equity as a source of inspiration. Dr. Buie also paid tribute to his mentors, including those he met at the University of North Carolina Eshelman School of Pharmacy.

His address, entitled A Journey of Gratitude, was in memory of an educator and caregiver who was instrumental during Dr. Buie’s teenage years.

About Dr. Larry W. Buie
Larry W. Buie, PharmD, BCOP, FASHP is a Clinical Pharmacy Manager and PGY2 Adult Oncology Residency Program Director at Memorial Sloan Kettering Cancer Center, in New York, NY, where he had previously worked in direct patient care. He has been a Board Certified Oncology Pharmacist since 2008 and is a Fellow of the American Society of Health-Systems Pharmacists. Dr. Buie received his Doctor of Pharmacy degree from the University of North Carolina Eshelman School of Pharmacy in Chapel Hill, NC in 2005. Dr. Buie has made multiple contributions to medical literature and routinely provides continuing education to pharmacists in a variety of settings. He has been a HOPA member since 2008.