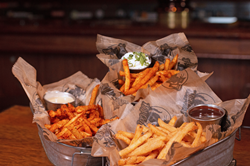 “These new fry flavors give Cosmik fans a chance to experiment and ultimately determine what stays on our menu. We researched more than 150 seasonings from around the world and narrowed it down to three.”

HopCat announces today the addition of three never-before-seen fry flavors to its menu. The exclusive fries launch nationwide at all HopCat locations beginning September 3. Customers can vote for their favorite flavor online at decidethefries.com. The most popular fry flavor will become a permanent feature on the menu, joining HopCat’s signature Cosmik fries.

“These new fry flavors give Cosmik fans a chance to experiment and ultimately determine what stays on our menu,” says Shawn Blonk, Senior Director of Food & Beverage. “We researched more than 150 seasonings from around the world and narrowed it down to three, irresistible flavors to vote on: Funnel Cake Fries, Fiesta Fries, and Shakshuka Fries.”

Guests may vote once per day at decidethefries.com. Three lucky voters will be selected at random to win HopCat prizes:

The restaurant’s famous Cosmik fries are one of the Top 10 french fries in America, according to Food Network Magazine.

In addition to the new fry flavors, HopCat debuts “Bottomless Fries” with the purchase of any burger on Tuesdays, beginning September 3. Bottomless fries come with the original Cosmik fries and exclude the specialty flavor fries.

For more information on the contest, or to vote, visit http://www.decidethefries.com.

Guests can use #DecidetheFries on social media posts to be featured on the HopCat feed.

ABOUT HOPCAT:
Founded in Grand Rapids, Mich., in 2008, HopCat is the flagship brand of BarFly Ventures. HopCat is a destination for locals, tourists and beer fanatics alike, earning international accolades such as: “No. 3 Beer Bar on Planet Earth” by Beer Advocate Magazine, “No. 2 Beer Bar in America” by CraftBeer.com and “No. 1 Brewpub in the United States” by RateBeer.com. HopCat has 17 locations all over the Midwest, Florida and Great Lakes regions.