A teacher goes to desperate lengths for a medical procedure in a country without a social safety net in the midst of a coronavirus epidemic. 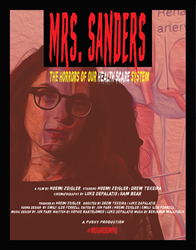 The Teacher of Your Nightmares

THE MOVIE HAS ITS OWN HORRIFICALLY ENTERTAINING TRAILER:
Mrs. Sanders / Trailer

Zeigler describes Mrs. Sanders as a political horror about a college professor who discovers her insurance has declined to cover her medical procedure. Things go awry when Mrs. Sanders discovers that her hero Bernie Sanders’ presidential run is being squashed by the political establishment and her hopes of getting “Medicare for All” are dashed. She kisses Bernie Sanders on her computer screen and apologizes for what she is about to do before she is rudely interrupted by her students filing into class. Mrs. Sanders zeros in on Charlie in the front row. A creepy soundtrack hints that she is about to get her medical needs taken care of at Charlie’s expense.

Zeigler, an adjunct professor of film and media communications in the San Francisco Bay Area, credits Jordan Peele’s breakout movie "Get Out" for inspiring her to play with the horror genre. Peele describes Get Out as a “social thriller,” because it asks the viewer to look at the real life horrors and oppression that African Americans face in everyday life. With Mrs. Sanders, Zeigler endeavors to make a “political horror” which critiques in sharp terms the poor and working class’ lack of access to universal healthcare in a country with an $800 billion dollar military budget, corporations that pay zero taxes while their minimum wage workers need food stamps to eat, and health care and pharma industries driven by profit while average people resort to rationing their insulin and other meds. And with the Novel Coronavirus COVID-19 pandemic gripping the globe, the approximately 27 million Americans who live without any form of health insurance will delay getting tested for Coronavirus which many experts say will likely contribute to the virus spreading more rapidly. Mrs. Sanders brings to light that in the richest country on the planet, lack of medical care is a travesty, unethical and a real life horror.

Mrs. Sanders makes the case for Medicare for All, Bernie Sanders’ signature bill which boldly presumes that healthcare is a right and not a privilege. With Zeigler's real life students participating in the production of the short film (including writing, acting, cinematography, editing and sound design), she feels this is evidence of a new awakening where young people are increasingly using media as a tool to promote social justice.

ABOUT NOEMI ZEIGLER
Noemi aka Madeline Minx is an award-winning screenwriter, filmmaker, musician and performer. She earned her MFA in Film Directing from the American Film Institute and teaches film and media production at several colleges in the SF Bay Area. She's currently developing several TV and streaming projects including a political horror series consisting of short 10 minute long episodes that delve into the horrors of our society's lack of social safety net, touching on healthcare, homelessness, climate change, unfettered capitalism and racism. She is excited to take Jeffrey Katzenberg and Meg Whitman's phone call as soon as they discover this Quibi length project is perfect for their platform, launching on April 6. Noemi’s full bio as well as more Mrs. Sanders is available at: https://madelineminx.com/mrs-sanders-movie